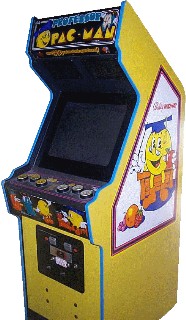 Professor Pac-Man is a quiz arcade game that was released by Bally Midway in 1983; it was the last game to run on their "Astrocade" hardware, and like Ms. Pac-Man, Pac-Man Plus, Baby Pac-Man and Jr. Pac-Man before it, it was developed without any authorization from Namco, the original creators of the Pac-Man series. This installment did not fare very well in the arcades, mainly due to its slow pace and its abandonment of the famous maze-based gameplay that had made many of the previous titles in the series (both Japanese and American, with the exception of the aforementioned Baby Pac-Man, as it was a video-pinball hybrid) so popular - and it was written in the FORTH programming language.

Bally Midway had originally planned to release three different versions of their quiz game: Family (for younger players), Public (for bars), and Prizes (for casinos); there were also to be software revisions at quarterly intervals in order to prevent people from memorizing the answers. Unfortunately for them, however, the game was almost an immediate flop, and most operators only had it hanging around for as long as it took to get it shipped back to the distributor - and only 400 cabinets (all of which were of the "Public" variety) were ever produced. Approximately 300 cabinets ended up getting shipped back to the manufacturer and converted to Pac-Land cabinets in 1984, which is why it was not uncommon to see a Pac-Land cabinet with Professor Pac-Man side art in the mid-1980s; it is thought that only a very small number of Professor Pac-Man cabinets still survive today presumably in the double digits.