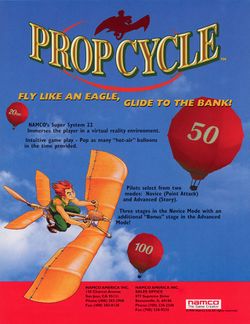 Prop Cycle is an aerial cycling arcade game, which was released by Namco in 1996; it runs on the company's System 22 hardware, and the player must use an exercycle with movable handlebars to pilot a winged bicycle known as a "Raperopter" (pronounced Rah-peh-ropter) and receive points by bursting the hot-air balloons ahead of it. In the Novice Mode, the player has to try and get as many points as they can on a single stage of their choice and shall be rated based on how many balloons they burst - and if they clear their chosen stage in this mode, they shall receive bonus points for the time they have remaining. However, in the Advanced Mode, the player must try to make it through each of the game's three stages in sequence and receives less time than they would in the Novice Mode; they must also gain each stage's minimum quota of points to proceed to the next one and if they gain all three stages' minimum quotas of points, they will proceed to an additional stage which cannot be selected in the Novice Mode (or continued from if the player's time runs out on it). From 1999 to 2003 the game was also featured as a challenge in a BBC quiz show, Friends Like These.