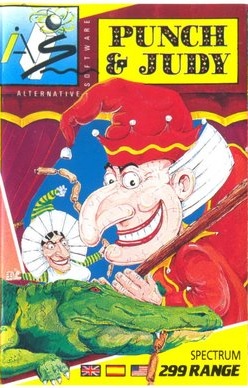 Punch & Judy is an action game that had been developed by Clockwize for Alternative Software and released upon the Sinclair ZX Spectrum, Amstrad CPC, Commodore 64 and MSX in 1989; it is based on that seaside puppet show of the same name, is set in Clockwize's home town of Bridlington, and it also has several Pac-Man cabinets (which were still common at this time) in "Joyland" video arcades.

Punch and Judy is based on the popular traditional seaside
show in which you take the role of Mr. Punch. Your task
involves constructing the show booth, finding the rest of the
cast and finally taking part in the show itself. (A thrill a minute
task).
Easy eh? Not so because the eight parts needed to build the
booth are scattered around the town and must be found and
taken one by one to the beach. However certain pieces are too
large to be carried through narrow doorways and the tide is
slowly coming in. (Oh no; behind you, behind you!)
Once the booth has been built, you must then scour the town
for the other cast members, hit them (that's the way to do it!)
and lead them to the beach. Unfortunately Punch's progress
may be hindered by the presence of a snap-happy crocodile or
a wandering policeman ('ello, 'ello, 'ello). If you are bitten by the
crocodile the tide will come further in. If on the other hand you
are arrested, you will be taken to the police station and any
object or person you have with you will be taken elsewhere.
There are ways of avoiding these hazards! Can you find them?
© Alternative Software 1989