The various modes available for play are the star of Puyo Puyo Tetris. They may implement the rules of Puyo Puyo, Tetris, or a new set of rules to incorporate both contrasting play styles into one hectic match. 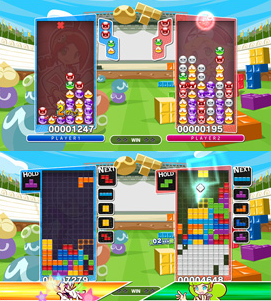 A simple game of Puyo Puyo or Tetris.

The simplest mode, where the player may choose whether they want to play Puyo Puyo or Tetris. The opponent may either have a matching play style or a different one, though the rules are straight-forward to players familiar with the multiplayer modes of the original games; Puyo Puyo rules are based on Puyo Puyo Tsu while Tetris rules are based on classic multiplayer rules. Garbage blocks and clear Nuisance Puyo are sent to the other players as a chance to slow them down; this is done by line clears in Tetris and Chains in Puyo. Puyo players cannot use hard drop by default, but this setting may be changed in local battle and Club mode online. When up against a player using a different game mode, the strength of the attacks are converted to match the rules of the other mode, and the shape of the obstructing garbage/nuisance is converted to match it as well. Additionally, when playing Tetris with at least one Puyo player, the Tetris fields annex an "Attack Gauge" which stores attacks when performing a combo (REN in-game), and sends attacks altogether. 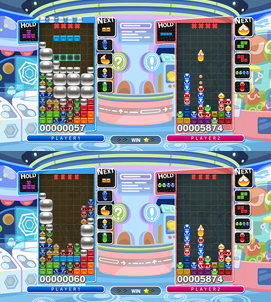 Form lines with Tetriminos and chains with Puyo.

The aforementioned rule where Puyo and Tetrimino appear in one playfield. It is 8 blocks wide and 16 blocks tall, which is the average of the Puyo field (6x12) and Tetris field (10x20). When any block stacks on the red X's shown at the top of the 3rd-6th rows, the game is over. The size of a Puyo is the same as the size of a block of a Tetrimino, and while both can be cleared with their respective algorithms, the HOLD function can be used for Puyo as well. Puyo can be hard-dropped by default. This mode is made more complex by elements such as: 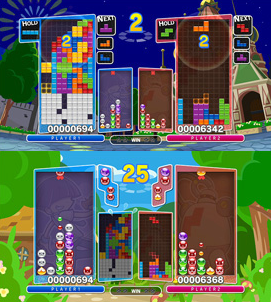 The rules are the same as VS, with the exception that both Puyo Puyo and Tetris must be played. The modes switch every 25 seconds for both players, and they must continue where they left off before being switched back to the other mode. This cycle is continued until the typical clear requirement is met: fill up either one of the opponent's fields while it is in play. If a Puyo or mino is falling as the switch occurs and it is not hard-dropped by the player, it will continue to drop on its own without any control. Meanwhile, if a chain is created in either Tetris or Puyo Puyo and it is switched before the effects can take place on the opponent's field, the attack will occur on the field that is currently in play, converting it as is done for differing modes in VS. 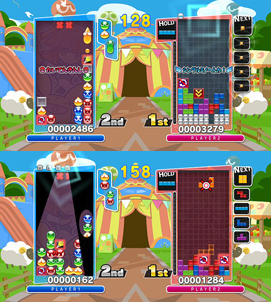 Form lines and chains to use items.

In Party Mode, players are given items that can have good (buff) and bad (debuff) effects. These effects can be for the player (self) or to others (opponent). Within 2 minutes, the player who earned the highest points will be the winner. Topping out or reaching the 'X' will not make the player lose, but other players will receive 1500 points. An item block is equal to the size of a single Puyo and the 'O' Tetrimino. Various items have the following abilities: 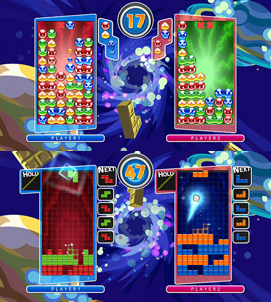 Both players are sent immediately to fever mode (Puyo) and Lucky Attack (Tetris). After one minute, all the garbage created by the players will be sucked into a black hole and "explode", thus the name Big Bang. Players who created less garbage than the others will take damage. If the a player's HP bar becomes empty, he or she will be eliminated. Last player standing will win. In the Puyo Puyo mode, players need to find the trigger puyo to start the chain. The chains of puyo become larger every time the player clears the previous one (denoted by 'CLEAR!'), and smaller if the chain did not reach the required number (denoted by 'MISS'). In the Tetris mode, Lucky Attack gives the player a pre-made stack where they must clear lines using the given tetriminoes. The given tetriminoes depend on the pre-made stack (a stack for T-spins gives the player T-tetriminoes). Each stack usually takes 5 to 7 line clears, and other stacks may allow all clears. If the player drops a tetrimino without clearing a line, the player "misses" and is given a new stack. 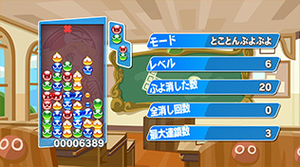 A simple single-player-only mode that consists of Puyo and Tetris challenges, including: