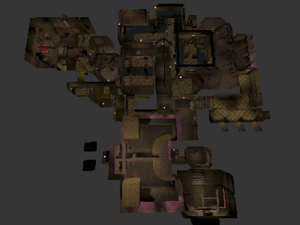 Castle of the Damned, overhead map.

After leaving the slipgate (shown in the top-left corner of the map), you need to pass through the castle and enter it.

This is not a difficult map. In the first room, defeat or evade the enemies that currently have their back turned to you.

When you enter the front doorway, you reach a two-floor room, with the bottom flooded with water. To reach the silver key, you need to head to the left on the upper floor, either by jumping across the gap, or walking around. Walk through the corridor, avoiding the spikes firing from the walls.

In the room with the yellow armor, you can shoot the button to retrieve it. On hard difficulty, two Scrags will appear and attack once you unblock the path to the armor.

Head up the stairs to the right. Defeat the knights that arrive from the side room, and push the button within that area. The bridge to the silver key will extend, allowing you to take it and opening a shortcut to the silver key door.

After going through the newly opened door and through the next corridor, look for a branch to the left for the silver key door. Open it, and press the floor switch.

The floor switch will cause two blocks to slowly rise and push into wall switches. The door in front will release a monster, while the door on the opposite side leads to the exit.

At the start of the map, head to the rocket launcher if you are close enough, then head to either the Quad damage or Megahealth.

While a player can block access to the exit, the actual points are scored by patrolling the map. If you want to camp a certain location, you may want to cover access to the Rocket launcher, as the two routes to access the area are covered by one vantage point (which allows for a limited retreat if you get injured.)

Go to top
← Slipgate Complex | Castle of the Damned | The Necropolis →