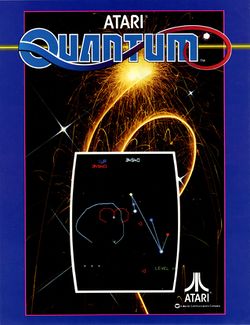 Quantum is an arcade game that was developed by General Computer Corporation for Atari in 1982, as part of a legal settlement for their Super Missile Attack speed-up kit for Atari's earlier arcade game Missile Command (1980); it was the first game from them to utilize a Motorola 68000 microprocessor (running at 6.048 MHz), with two Pokey chips (running at 600 KHz) for sound. The player must use a trackball to take control of a probe, and encircle particles (20-point Electrons, 100-point Triphons and Splitters, 200-point Photons and Positrons, 300-point Tryds and Nucleuses and 400-point Pulsars) to destroy them - however, if any particle (except Electrons) should touch the probe, it shall cost it a life.

As the game progresses, the speed of the enemy particles increases while the length of your probe's "trail" decreases; encircling multiple particles also doubles their points. The Nucleuses shall also join together to form bonds (which can again kill the probe when they are red) - and white particles move vertically, while those of other colours move diagonally. Any player who got the highest score on the cabinet was also allowed to sign his or her name at the top of the high-score table with the trackball, as well as enter his or her initials (up to three characters) there (but it wasn't particularly easy to do).

This game did not fare very well in the arcades (and only around 500 cabinets were ever produced); many of the unsold (and returned) ones were sold to either the general public or employees of Atari.