Quest for Glory I: So You Want to Be a Hero

Quest for Glory I: So You Want to Be a Hero | Table of Contents | Gameplay | Walkthrough 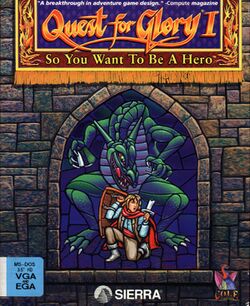 Quest for Glory I: So You Want to Be a Hero (originally titled Hero's Quest I: So You Want to Be a Hero) has seen both an EGA and VGA release, with a version of the game over a command line parser and with the usual three-verb Sierra interface. There are some minor differences between the versions mostly centering around interface — actions are easier to identify in the remake, as well as conversation topics, and certain actions are replaced by point and click actions, such as clicking the hand on someone replacing typing in thief sign. Whichever version you play however, the puzzles and strategy will largely be the same, it's just a matter of which looks prettier.

Like all the games in the series there's a focus on solving puzzles, building up your skills, and fighting monsters. Most players will probably find this title the most challenging in many respects though, since quite a few basic puzzles can't be solved until you've built up your skills a fair amount, whether that involves throwing, climbing, or the fetch spell. Assigning skill point to those attributes early on can help, but you may also want to take the opportunity to add some skills to create a hybrid character. The pick locks skill will let you act as a thief and magic will let you do all the wizard related quests, and if you want to collect all the spells a non-wizard can have in the series you should start from the second game or earlier.

Your abilities and the ways you solve puzzles will vary with your character class. Fighters generally have to rely on brute force, fighting their way past monsters or throwing things from a distance. Thieves can pick locks, sneak around, or throw or climb to reach their target. Magic Users will want to use spells from a distance generally and find some creative application of magic to get through a situation. Thieves will also want to find the thieves guild and magic users will need to buy and find spells to become useful.

The game also uses a time-sensitive system where the game transitions between day and night. You can rest for an hour at a time to recover some health, stamina, and mana, and you can go sleep for the night to restore all your stats. Most activities can only be done during the day, although a few monsters come out at night and there are a couple things that only happen in the forest at nighttime. You can sleep in Erana's garden to the north, or at the inn in town although you may have a hard time getting in at night. Meals can also be purchased at the inn and rations can be stocked up on at the market, although Erana's garden has a fruit that will keep you full for a day.