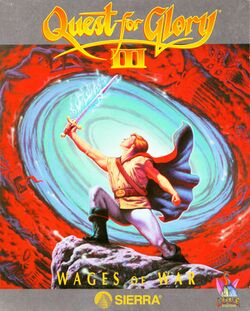 Quest for Glory III: Wages of War is the third game in the series. It's a bit of an oddball title: the other games are based on a gradual progression of the seasons, from spring in Spielburg, to summer in Shapier, fall in Mordavia, and Winter in the Mediterranean Silmaria. Quest for Glory III also breaks the continuity from the last game, where the promised sequel was Quest for Glory III: Shadows of Darkness, with a title and plot eventually to be re-used in the next game. It also violates a few conventions from the other titles, since the game contains no thieves guild and the plot is much more linear, based around traveling between feuding cities. That said, it's still a nice break between Shapier and Mordavia, and worth playing in its own right.

The interface is a slight extension of the standard Sierra three verb interface, with icons for looking, using, and talking to objects in gameplay. Talking to people may lead to a conversation tree where you can click the mouth icon on yourself or the other character to tell or ask about a subject, and sometimes using an object will lead to a list of possible ways to interact with it. Most of the puzzles are triggered by using the right item or skill to solve them, although some events are only triggered by solving seemingly unrelated quests, such as visiting the goddess at the Temple in Tarna causing the leopard woman to show up. Very few puzzles are knowledge-based, or require you to obtain some information or exhaust the conversation trees of people in the game to move forward.

In addition to solving puzzles, you'll also have to engage in combat and work on perfecting your skills. You will have two or three gauges of health depending upon your character class. All character classes have Health Points and Stamina. Your health points determine how much damage you can take, and are decreased when you suffer damage in battle or gameplay situations. Losing all your health points kills you and ends the game. Your stamina determines how many actions you can perform, every time you perform an action it consumes a little bit of stamina. Performing actions which require stamina drains it and if you run out of stamina doing strenuous activity like running will lower your health. Some actions in battle can not be performed without sufficient stamina as well. Wizards also have mana points, which determine how many spells can be cast, each one draining a set amount of mana. If you are poisoned your health will drop steadily until it wears off or you cure yourself, and you also need to rest and get meals at the inn or eat rations to keep your character from starving or dying of exhaustion.

Your abilities and the ways you solve puzzles will vary with your character class. Fighters generally have to rely on brute force, and using strength and fighting monsters to clear their way through things. Thieves will rely on picking locks and breaking into places, using stealth to avoid notice, or disarming traps. Magic Users will want to use spells from a distance generally and find some creative application of magic to get through a situation. Paladins share traits in common with Fighters and Magic Users, and will generally take an approach more similar to Fighters, but they also get more helpful abilities at their disposal and have the ability to participate in more sidequests.

The game also uses a time-sensitive system where the game transitions between different hours of the day and night. You can rest for an hour at a time to recover some health, stamina, and mana, and you can go sleep for the night to restore all your stats. Most activities can only be done during the day, since that's when most of the people you might want to talk to will be awake, although there are a couple night owls you might want to meet. Time passes extremely quickly while traveling, and you may be best off building a fire with a flame dart spell or a tinderbox at night to avoid getting woken up by monsters when you may be low on health or vulnerable. Keeping a large number of rations is also essential for making long trips across the world map.