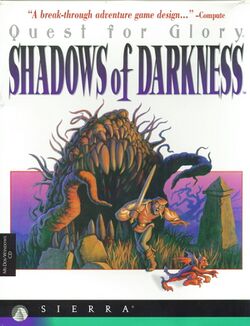 Quest for Glory IV:Shadows of Darkness is the fourth game in the series. It's a version often remembered for being plagued with bugs and glitches, many of which have since been fixed by fans (refer to Gameplay for details).

The game's interface is a variation on the point and click interface perhaps best known for the King's Quest series, with actions allowed for looking at, using, and talking to objects in the game environment as well as using and combining inventory objects. Quest for Glory IV also expands the interface to allow multiple actions to be performed on an individual object by selecting one from a list of choices, and rather than having conversation being a scripted action which takes place when one character talks to another, each character has a large number of topics which you can ask them about. This leads to quite a lot of dialogue being included, even for an adventure game. Some of the exchanges by the inhabitants of the inn are also ad-libbed on top of the game's script.

A good number of the puzzles in the game are "knowledge-based". In other words, solving a puzzle isn't necessarily using the right item from inventory or even being able to fight a monster or use an ability with enough skill. Being able to complete a puzzle may be a matter of getting enough information from a particular character, or relating some of the things you hear from different people and are able to verify for yourself. In addition to asking people questions your character has the options to tell them things when you click the mouth icon on yourself, which can allow you to let them know things you've found out or things you've done, which can lead to a solution to a puzzle or give you more information or clues. Gaining information and using it becomes analogous to using items from your inventory.

The game has elements of the usual adventure game with solving puzzles with some of the above methods, it has RPG elements since you can get into random fights with monsters as you wander around the valley and enter into some guaranteed "boss" type fights. And completing some puzzles involves building up a skill to a certain level. Your skills increase the more you practice them. Killing enemies to build experience isn't particularly helpful by itself, it's only by performing actions such as dodging and using your weapon that your character grows any stronger. Hence, practicing throwing and your other skills outside of battle can be more effective than fighting a large number of battles.

You have two or three gauges of health depending upon your character class. All character classes have Health Points and Stamina. Your health points determine how much damage you can take, and are decreased when you suffer damage in battle or gameplay situations. Losing all your health points kills you and ends the game. Your stamina determines how many actions you can perform, every time you perform an action it consumes a little bit of stamina. Performing actions which require stamina drains it and if you run out of stamina doing strenuous activity like running will lower your health. Some actions in battle can not be performed without sufficient stamina as well. Wizards also have mana points, which determine how many spells can be cast, each one draining a set amount of mana. If you are poisoned your health will drop steadily until it wears off or you cure yourself, and you also need to rest and get meals at the inn or eat rations to keep your character from starving or dying of exhaustion.

Your abilities and the ways you solve puzzles will vary with your character class. Fighters generally have to rely on brute force, and using strength and fighting monsters to clear their way through things. Thieves will rely on picking locks and breaking into places, using stealth to avoid notice, or disarming traps. Magic Users will want to use spells from a distance generally and find some creative application of magic to get through a situation. Paladins share traits in common with Fighters and Magic Users, and will generally take an approach more similar to Fighters, but they also get more helpful abilities at their disposal and have the ability to participate in more sidequests.

The game also uses a time-sensitive system where the game transitions between different hours of the day and night. You can rest for an hour at a time to recover some health, stamina, and mana, and you can go sleep for the night at a few select locations to restore all your stats. Certain events also take place on specific days, and some characters have different conversation trees for the first few days on which you talk to them. Certain characters and events are only accessible during the day or night.