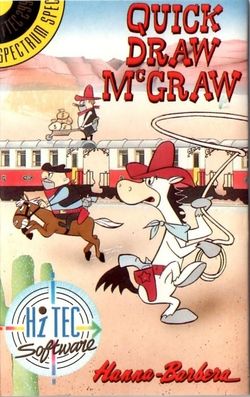 Quick Draw McGraw is a run and gun game that was developed by Twilight for Hi-Tec Software and released on the Sinclair ZX Spectrum, Amstrad CPC, and Commodore 64 in 1990; it is based on that Hanna-Barbera cartoon series of the same name, which aired upon US television from 1959 to 1961.

In the Wild West it's a hard life being a train driver. Trying to get your passengers and cargo safely
to their destination without Bandits and Indians attacking the train and stealing everything they
can. Who better to guard this train than Quick Draw McGraw, the fastest Hoof in the West.
You play the part of Sheriff McGraw who has four trains in all to
protect, rid each one of enemies and dispose of the head Honcho
perched smugly at the front of the train.
At various places Quick Draw has to enter a carriage and clear out
the enemy inside.
© Hanna-Barbera Productions Inc. 1990