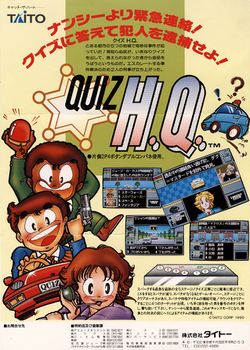 Quiz H.Q. (クイズH.Q., lit. Kuizu H.Q.) is a quiz arcade game that was released by Taito Corporation in 1990 only in Japan; it runs on the company's F2 hardware, and is the second spin-off from Chase H.Q. (which was released two years earlier). As with Quiz Torimonochō, which was released earlier in 1990 and also ran on Taito's F2 hardware, a knowledge of the three Japanese writing systems is essential if you wish to succeed in it - and the players must, once again, help those two undercover policemen Tony Gibson and Raymond Broady (also known as "Mr. Driver") catch various criminals, this time by answering multiple-choice Japanese questions (for every one answered correctly, their black Porsche from the original Chase H.Q. and red Nissan 300ZX from S.C.I. will get closer to the criminal's car, but for every one answered incorrectly they'll lose a "life-wrench"). This was also the only Chase H.Q. game which never got a release in the US (on account of its cultural differences).