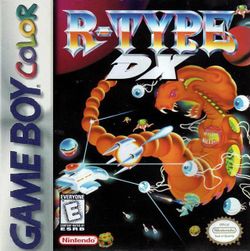 R-Type DX is the Game Boy Color compilation of the games R-Type and R-Type II, released in 1999. The compilation includes the first Game Boy ports, the version remastered in color, and the option to play both level sets in one continuous run.

As it is the Game Boy port of the game, it omits a few stages of the arcade version. The fourth and fifth stages of R-Type were removed, and the first stage of R-Type II was also removed. However, you may use the stage select function to start from any level.

For the pages on the individual games, see: