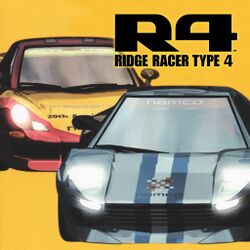 R4: Ridge Racer Type 4 is a racing game that was released by Namco for the Sony PlayStation in Japan on December 3, 1998 and in the United States on May 1, 1999; the sixth (and third direct-to-console) title for their Ridge Racer series, it again features the "Grand Prix" mode from Rage Racer (which was released two years previously). It also introduces a new "Vs. Battle" mode, in which two players compete against each other in a single race by means of a PlayStation link cable, a second PS and a second TV - and there is now also a "Garage", where a player may "register" any cars he has unlocked in the Grand Prix mode. There's also eight new tracks ("Helter Skelter", "Wonderhill", "Edge of the Earth", "Out of the Blue", "Phantomile", "Brightest Nite", "Heaven and Hell", and finally "Shooting Hoops"); the first, fourth and fifth are set in Yokohama while the second and seventh are set in Fukuoka, the third and sixth are set in New York, and the eighth is set in Los Angeles. There are also four new racing teams to choose from (all of whose names are references to older Namco games): "R.C. Micro Mouse Mappy", "Pac Racing Club", "Racing Team Solvalou" and "Dig Racing Team" - and the "Gnade" car type is replaced by the new "Terrazi" (after an enemy from Xevious).