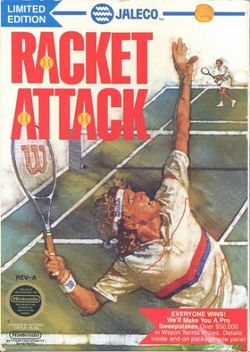 Moero!! Pro Tennis (, 燃えろ!!プロテニス?) is a tennis game developed by TOSE for the Famicom and published in Japan by Jaleco in 1988 as part of their "Moero!!" sport series (which includes Bases Loaded.) It was released in North America as Racket Attack later that same year, but did not see a release in Europe until much later in 1994. The North American version features an endorsement from Wilson Sporting Goods. As a tennis game, it aims for a more realistic presentation of the sport instead of employing arcade-style game play.

There are two gameplay modes present: one-player (representing a tennis tournament) and two-player (which represents an exhibition match). After winning seven matches in single-player mode, the player receives a championship trophy. These matches become increasingly difficult as the player progresses through them. It is possible to play on a grass, clay, or even a hard court. Women's matches require fewer wins than men's matches. There are 16 different players; eight of them are male while eight of them are female. They have their own strengths and weaknesses for experimenting. However, the male players can only play against other male players while females can only play against other females.

Passwords allow players to retain their statistics after playing for a while. There are six possible tennis moves; including the lob, volley, and slice. While serving, the camera angle becomes slightly more over the player's shoulder and the score is made visible. Both buttons of the NES controller are used to hit the ball;

is used mainly for front-court action while

is primarily reserved for back court moves. Players can protest to the line judge if a decision is not made in their favor.