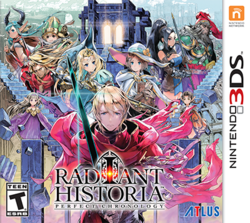 Radiant Historia: Perfect Chronology is an enhanced port of Radiant Historia for the Nintendo 3DS. It was released in Japan on June 29, 2017 and in North America and Europe on February 2018. It features new character designs by Masaki Hirooka, voice acting, a new character named Nemesia, and an additional scenarios that take place in a Possible History timeline. The opening animation was created by A-1 Pictures and the music was composed by Yoko Shimomura.

The continent of Vainqueur... A decaying world in which everything is slowly being engulfed by sand. This strange phenomenon emanates from the site of an empire that met its downfall centuries ago. And as desertification approaches, a fierce war rages over what little fertile land remains... To the east lies Alistel, a nation under siege by the war-hungry kingdom of Granorg. It is here that a certain intelligence agent is about to embark on a new mission. A mission of critical import... This agent, the most able member of Alistel's Special Intelligence unit, is known for his signature red garb. His name... is Stocke.