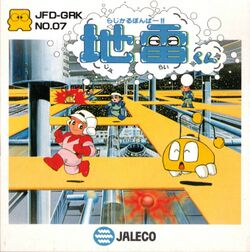 Radical Bomber!! Jirai-kun FDS is a strategy game developed and published by Jaleco for the Famicom Disk System in 1988. The environment of the game resembles a giant board game where each player moves from one space to another. The goal of Radical Bomber is to carefully think out a plan of action and find a way to trap the opponents by removing connections between each "square" on the map. Successfully isolating an opponent from the rest of the board causes them to forfeit the game. If you manage to isolate every every opponent, Jirai-kun will advance the next level. This game was only released in Japan, and has never been translated from its original Japanese language.