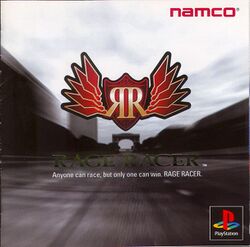 Rage Racer is a racing game, released by Namco for the Sony PlayStation in Japan on December 3, 1996 and in the United States on April 30, 1997; in June of 1997 Sony Computer Entertainment went and published the game for the European market. The fifth (and second direct-to-console) title for the Ridge Racer series, it introduces the opportunity for players to paint their cars and design the logo on their hoods as well as a "Grand Prix" mode which supersedes the "Arcade" mode from the PS port of the original Ridge Racer (and Ridge Racer Revolution) - and the player will initially only have a single car to control at the start of the game, but after he has won "eg" (by winning races), he shall have the opportunity to upgrade it by going to the "Engineer Shop", or go to the "Car Shop" where he can look at the cars he has unlocked (there are four different types; "Age", "Lizard", "Gnade", and "Assoluto"). Each car possesses a main attribute that helps in completing a specific track - and the qualities upon which the cars and tracks are based are handling, acceleration, speed and a catch-all "well-rounded" category. The player must rely on track knowledge, and match the best car to the track; he shall also win the game, by successfully completing all five classes and the special, unlockable sixth class. The name of the "Time Trial" mode has also been changed, to "Time Attack", and there are also four new tracks - "Mystical Coast", "Over Pass City", "Lakeside Gate" and "The Extreme Oval". The box art for all three versions features the Russian character ya (я) because it is a backwards capital "R", but the Japanese box art also features the tag line "Anyone can race, but only one can win. RAGE RACER"; this was also the first Ridge Racer game since the aforementioned original to only have single-player capability (the aforementioned "RRR" allowed two-player capability, through the PS link cable, with a second PlayStation and a second television), and the races can be between three and five laps long.