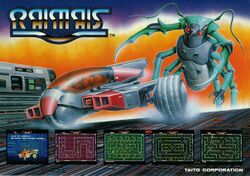 Raimais (レイメイズ, Reimeizu?) is an action arcade game developed by Taito and manufactured in 1988. The object of the game is to drive your vehicle around a maze in order to clear the maze of dots while avoiding the enemy. The game consists of 32 mazes total plus boss fights (some optional, some not). The Japanese version also has a storyline and a final boss fight.

This game is often described through an analogy: Raimais is to Head On as Arkanoid is to Breakout. That is, Raimais takes the basic gameplay of Head On and augments it in extremely similar fashion to how Taito enhanced the gameplay of Breakout when creating Arkanoid. These enhancements include, but are not limited to, a variety of stage arrangements, differently colored power ups signified by a single letter, differently colored targets (in this case dots, compared to bricks in Arkanoid) as well as metallic targets that need to be collected multiple times.

Raimais was never actually ported to any contemporary console under the same title. However, an extremely similar but simplified variation of the game was released for the Famicom Disk System under the title Yuu Maze. In 2006, it was included in the compilations title Taito Legends 2 for the Xbox and PlayStation 2, as well as Taito Legends Power-Up for PSP.