This giant gorilla, lizard, and wolf are, again, the protagonists for this game; they were "ordinary" humans (until they were mutated by eating radioactive vitamins, taking a bath in a radioactive lake, and eating a "scam" sausage respectively). Their only goals now are, again, to destroy every city they come across, and the game has 130 regular days of destruction, along with four "secret" ones and four "Grudge Match" ones that put them up against each other, and they must punch (and now kick) buildings and vehicles, to destroy them, as well as eat civilians that live in the buildings to keep their energy up - however, they will, again, constantly be under attack from the various countries' armies, and can also lose energy by falling from a distance which is greater than their own height or into water, being hit by lightning, and by eating something "bad". Once one mutant runs out of lives and energy, he (or she, in the case of Lizzie) shall de-mutate back into a naked human, and slowly walk sideways off the side of the screen; the remaining players shall then have the chance to eat him (or her) for extra points. The mutants can collect hourglasses to extend the amount of time they have before the current city is evacuated, televisions displaying exploding (and screaming) faces to gain "Hot Loogie" and "Death Breath" powers, bears, dolls and bones for a "Security Bonus" and boxing gloves, weights and barbells for more power - and three examples of "Mega Food" in this are bananas, ladybirds and steaks. If one of the mutants should find a flag of the US inside a building and punch it, it will spin round, and change to that of another country, in this following order: United Kingdom, France, Spain, Italy (reversed), Greece (improperly coloured), Germany, Denmark, USSR (even though it disbanded in 1991), Japan, Australia, South Africa (pre-1994), Brazil, and Hungary (with a blue cross); for the end of that day, all of them will be sent on a "World Tour" to the country it represented when the text "WORLD TOUR" appeared on the screen (by riding on jumbo jets while destroying Scumlabs airships, hot-air balloons and satellites, along with eating civilians who are holding balloons for extra points, but avoiding bombs).

When one of the mutants eats a barrel of toxic waste, he (or she, in the case of Lizzie) will transform into an even weirder bat-like mutant, named "V.E.R.N." (which stands for Violently Enraged Radioactive Nemesis), for the rest of the day; this means that Lizzie will undergo a sex change, until she changes back into her original lizard form. He has the ability to fly and use his wings to cause damage to buildings - and if Flying Toasters (see the next section for information) are present, he can also spit fireballs at them just like they shoot them at him.

Named after the legendary screensaver, these scientists are Scumlabs' air elite; they will fly into view from the left and right sides of the screen in the background, then fly into the foreground where the helicopters, police cars, jeeps, tanks and Star Wars-like planes and robotic walkers will always be while shooting flames at the mutants from the flamethrowers they are holding in their right hands.

This Transformer-like robot, who is described for the attract mode as "Scumlabs' urban pacification dreadnaught", appears on some days to attack the mutants; he walks into view from the right side of the screen (like the Star Wars-like robotic walkers do), and can temporarily stun the mutants by punching them to knock them over. Once he has been hit enough times, he shall explode, then become one of those aforementioned Star Wars-like robotic walkers - however, you will still have to hit him enough times in this form, to completely defeat him. 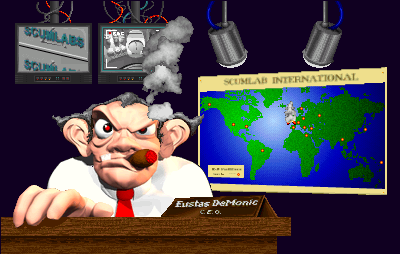 At the end of the last day of a "World Tour" you shall be greeted by Scumlabs' cigar-smoking CEO, instead of Dr. Veronica; the locations of his company's sixteen secret nuclear research facilities are indicated on the map to his right. The one the mutants had destroyed while they were there will be marked with an "X", and smoking (in the case of the screenshot to the left, it is the one in the United Kingdom) - and once the mutants return to the United States and find another flag, it shall skip that country as they punch it to make it spin around (unless, of course, it was one of the three in the United States). He's also reported to have underworld connections as evidenced by the fact that one of the game's "secret" days that can only be reached by entering a secret code, while in Fairbanks, Alaska, takes place in Hades; on some days where the location is on The Moon (which is populated by Scumlabs astronauts), the three mutants will also be confronted by an enormous bouncing alien, which has his face.