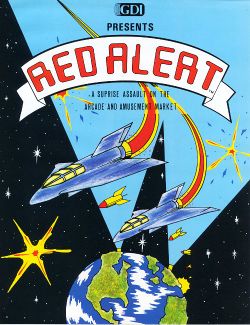 Red Alert is a fixed shooter arcade game, that was released by both Irem and GDI in in 1981; it runs upon Irem's M27 hardware (an Intel 8085A running at 2.5 MHz, and a Zilog Z80 running at 3.579545 MHz, with two General Instrument AY-3-8910s for sound). Each round begins with a spoken mission brief which begins with the words "Red Alert! Enemy aircraft approaching!", followed by details of the game objectives for the round - and it is one of the earliest uses of speech for an arcade game (after Namco's King & Balloon). Landmarks from the city getting defended are shown in the background of the gameplay; for example, during the "France" round, an image of the Eiffel Tower is shown. Some rounds take place at night - and in these rounds, the game area is illuminated only by two spotlights, which the enemy can destroy. The object of the game is to defend various cities from an unidentified enemy's attacks; each round's set in one of six locations (France, USA, Italy, Great Britain, Germany and Japan). The assaults consist of waves of planes, helicopters, night bombers, and MIRV bombs - and similar to Taito's Space Invaders each attack wave moves back and forth across the screen and becomes faster in successive waves. The screenshots below are taken from MAME, and inaccurate.