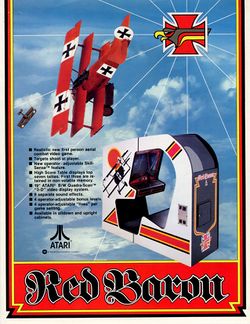 This guide is for the 1980 Atari arcade game. For other uses, see Red Baron (disambiguation).

Red Baron is a first-person shooter arcade game that released by Atari in 1980; it utilizes a Motorola M6502 microprocessor (running at 1.512 MHz), with a Pokey sound chip running at that same speed, and a custom DAC. Its name was also the nickname for Baron Manfred Von Richthofen (1892-1918).

The player must use an analogue 4-way joystick to take control of a virtual German WWI-era biplane, with a single button on it to fire its machine-gun; when an enemy biplane appears, its value starts out at 300 points, but decreases the closer it gets to the player. Once the player has fired a hail of bullets at the enemy plane, it will fall to the ground, and explode (which will award him the current amount of points shown under the text of "VALUE" to the right of his score) - and once the player has destroyed four enemy planes, an airship (which is worth 200 points) will appear. Once the player has destroyed it, he'll come to a brightly-outlined tank and pill-box (which are worth 250 points apiece); once he has destroyed them, he shall come to a faintly-outlined pyramid and building (which are worth 100 points apiece). As the game progresses, blimps and brightly-outlined ground targets shall start firing back - and the enemy planes will start moving faster (and eventually start firing back as well). In addition to dying from getting hit by an enemy bullet (indicating by bullet holes appearing on the screen and the plane falling to the ground and exploding), the player may also die from diving too low, and crashing into a mountain; also, if you hold the button for too long the text "GUNS OVERHEATED" will appear on the screen and you will have to wait a few seconds before it disappears (and you can fire) again. Finally, if you don't destroy an enemy plane before it reaches your own, the text "BEHIND YOU" will appear on the screen - and if you do not move out of the way in time, the enemy plane shall kill you.