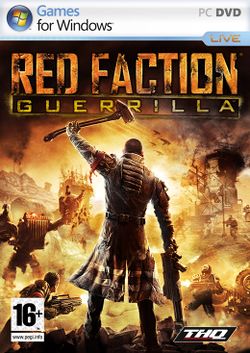 Red Faction: Guerrilla is a third-person shooter video game developed by Volition, Inc. and published by THQ, released at the beginning of June 2009. The game is the third installment in the Red Faction series.

Red Faction: Guerrilla features a third-person point of view; all previous Red Faction games were played in the first-person perspective.

This time around, players assume the character of Alec Mason, a miner turned rebel against the EDF. Alec is seen wearing a green army jacket and cargo pants. He is a man of unknown background but has gotten into the war against the EDF because of his brother’s murder and has become a part in the newly re-formed Red Faction.

Rick White revealed that most of the game will take place on the terraformed surface of Mars, with some parts in other places such as the Ultor labs to pay homage to the first Red Faction. Not much else is known of the game’s plot.

Released for Nintendo Switch, Windows, Playstation 4 and XboxOne, this game has been ported and updated on not just graphics but also all DLC content. The story with Alec Mason remains the same and the gameplay remains focus on delivering destruction that few games ever achieved. Co-op is also included in all versions as well as multiplayer.