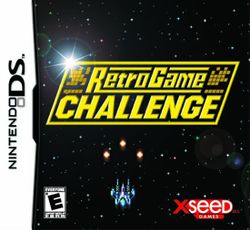 Retro Game Challenge (ゲームセンターCX 有野の挑戦状, Gēmu Sentā Shī Ekkusu Arino no Chōsenjō?, GameCenter CX: Arino's Challenge) is a Nintendo DS game developed by Indies zero and published by Bandai Namco Games based on the television series Retro Game Master. Shinya Arino himself gave much input into the game creation process. The game was released on November 15, 2007 in Japan, and in North America from XSEED Games on February 10, 2009. On February 26, 2009, a sequel, Game Center CX 2, was released in Japan. Despite good initial sales, Ken Berry of XSEED has said that the North American release of the sequel is unlikely, due to lackluster sales after its initial release.

In the game the player selects a boy or girl playing retro games to appease the Demon Arino (based on the TV show's host Shinya Arino). The Demon Arino gives four challenges to complete for each game. Each game is original, but with graphic, sound and gameplay elements which make it look old, or retro. Many of them are similar in both gameplay and appearance to real Famicom games of those years. They come with fully illustrated manuals.