Return of the Jedi

Return of the Jedi | Table of Contents | Gameplay | Walkthrough 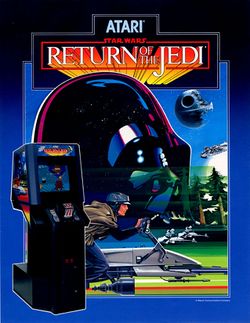 Return of the Jedi (fully titled Star Wars: Return of the Jedi) is an isometric shooter arcade game, that was released by Atari in 1984; it utilises two Motorola M6502s (the first running at 2.5 MHz, and the second at 1.512 MHz), with four of Atari's Pokey sound chips running at 1.512 MHz and a Texas Instruments TMS-5220 running at 672 KHz for sound. It is the second title for that original Star Wars series - however, as the name suggests, it is based on the third film in the trilogy (the first Star Wars game was based on Episode IV: A New Hope), and the second film, Episode V: The Empire Strikes Back, did not gain a game based on it until 1985 (it was Atari's only vector game after Major Havoc).

The game begins with the player guiding Princess Leia through the forest on Endor on a Speed Bike towards the Ewok Village while destroying enemy Stormtroopers; on reaching the village and joining C3-PO and R2-D2, the player must guide Chewbacca through a second part of the forest in a Scout Walker while avoiding other Scout Walkers, rolling logs, and catapulted rocks. But at the same time, Lando Calrissian is flying the Millennium Falcon towards the Death Star while destroying enemy TIE Fighters, so the game switches back and forth between the two characters every few seconds - and once Calrissian is inside the Death Star he must fly through a narrow tube leading to its reactor and shoot it, then turn around and escape from the Death Star before it explodes. The game then starts over again at a higher level of difficulty, but the order in which the scenes are played is randomised.