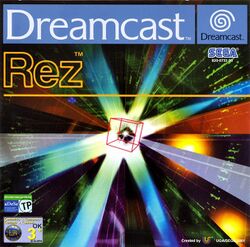 Rez is a video game developed by United Game Artists for the Dreamcast and the PlayStation 2, with another port (Rez HD) to the Xbox Live Arcade

Rez and Rez HD could be known as "musical shooters", with your avatar pulsing along with the beat, and firing weapons along with said beat, making musical sounds with each action. The object of each area is simply to get to the end of it, fighting the boss (or, in Area5, bosses) at the end.