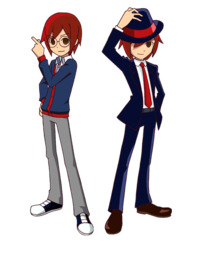 After the opening scene, you'll be thrown right into the first rhythm game, R01: Showtime.

Showtime is the first rhythm game to make an appearance (taking place right before Chapter 1) and serves as an introduction to the gameplay of Rhythm Thief. It shouldn't be too difficult.

There are three parts to the game; after each scene, the dancing will speed up. Some twirls will also be thrown in, in which case you make a circle on the touch screen with the stylus.

After the scene, leave Raphael's apartment and talk to Paula using

when Fondue approaches her. You can then use

to go to your next destination, Musée d'Orsay Station. Talk to the man here and he'll tell you about medals. Medals can be obtained simply by touching the right spot on the screen, so make sure you search the area thoroughly before moving on. Try it out now and, after obtaining some medals, the man will tell you to visit the shops down the street. Go right to the Flea Market and talk to the two store owners. Bernard tells you about recording sounds. Record the sound of the bat above the shop and play the sound over to be approached by Bernard. You can then talk to Auban, the other shop owner, before a new path opens up.

Your next destination is Tuileries Garden, where you can record the sound of the Merry-Go-Round. Record the sound of the pigeons at The Louvre and go further right to reach The Louvre, Main Entry. As evidenced by the patrolling police officer, sneaking in here is impossible, which is why Phantom R will be getting in through the Denon Wing. Follow the path that opens up and touch the glowing spot for a riddle. The correct order is as follows: light blue, yellow, pink, blue, green, light pink, purple.

You'll make it in through the Mesopotamian Exhibit. Before you can steal the bracelet, however, you'll have to take care of security. Go left to the First Floor Escalator and take it up to the Security Room. Follow the map until you reach a scene leading into the second rhythm game, R02.

The top screen shows you Phantom R's route and the touch screen gives you four colored buttons. Match the button to the statue Phantom R hides behind at the right time (when the circle closes in to the touch icon) to get Phantom R to match the shape of the statue with his pose. Use the wrong pose or don't time it right and he'll trip.

Using the beat here may help. Touch the corresponding button to match the end of the drum roll. The first part incorporates only the first two poses, while the second part kicks up the difficulty by adding a statue and throwing them in one after the other. The third part uses all four poses in addition to speeding the beat up. Complete the game successfully for Phantom R to reach the Security Room undetected.

Another obstacle presents itself with the new voice recognition lock. Backtrack to the previous area, then continue on right to find a sleeping security guard. Record the sound and return to the Security Room, then play the sound back to gain access in. Touch the red button and return downstairs to continue with the theft.

Pick up Joseph the guard's notebook to conveniently obtain some useful information concerning a security passcode. Turn Phantom R's attention to the display case on the left containing the bracelet. Press the button in the middle of the last row to crack the code, then begin to make your escape by taking the new path left. You'll have to get through R03 after the scene before completing the escape.

In this game, Phantom R runs across the rooftops while being pursued by the Roller Skate Brigade. Use

to slide. The first part is all about jumping. Press

to jump off of branches after swinging and get over obstacles. The second part of the game incorporates sliding. Watch out for tricks; these movements will sometimes occur in immediate succession. Press them just as Phantom R approaches the obstacle to complete the movement successfully.

Follow the path until you see a scene, then use an alternate path after spotting the constable to run into another scene. Afterward, press on the constable in front of you to find out his weakness. Go right, then pan the screen right to talk to Charles about Phantom Notes. Now pan all the way left to find the bulldog and record its sound. Return to the constable and play the sound back to open up the path back to Raphael's apartment. On the path, you'll see another scene and begin R04.

in any direction to attack knights approaching from the left, and press

to handle knights approaching from the right. Wait for them to get close (as always, use the circle closing in as an indicator) and then strike. This is one that takes practice; you should be able to get the timing right eventually once you get used to their jumping patterns.

As always, this game is split into three parts. The first part splits the right and left attacks for a simple battle. The second part has the beat speed up as knights from the right and left follow each other with smaller breaks in between. At the end of this part, quickly press both buttons once the boss approaches. The third part is much the same as the second part, albeit a bit trickier. You'll be able to get through this game with a B or an A rank with a bit of practice.

After the cutscene, StreetPass becomes available and the chapter comes to an end.

[Go to top]← Walkthrough | Chapter 1: Chance Encounter | Chapter 2: On the Trail of the Mark →