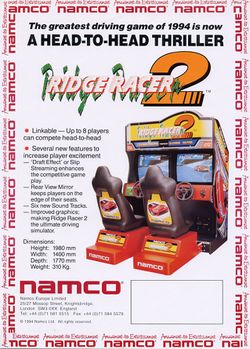 Ridge Racer 2 is a racing arcade game that was released by Namco in 1994; it runs on their "Super" System 22 hardware, and as the name suggests, it is the sequel to Ridge Racer, which was released in the previous year. As with the Final Lap series, Four Trax, and Suzuka 8 Hours, up to eight players can play simultaneously (when four 2-player cabinets are linked together) - and, your player's number determines which of the eight cars you will be driving (for the original, only Team F/A's was available).

The gameplay is very much like that of the original (except for the aforementioned fact that up to eight players can play simultaneously), there are six new songs that can be selected with the gear shifter at the start, that giant television over the entrance to the first tunnel is now playing the game of Galaxian (1979), all the billboards are now for older Namco games (including Air Combat from 1992), and there is now a rear-view mirror at the top of the screen (so you can see the other cars coming from behind).