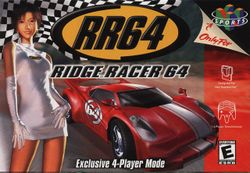 Ridge Racer 64 is a racing game that had been released by Namco on the Nintendo 64 in the United States on February 14, 2000, and in the European Union on July 4 of that same year; the eighth (and fifth direct-to-console) title of their Ridge Racer series, it introduces a "Quick Play" mode, in which the player must complete three laps of that old "Revolution Novice" track (in that "Team F/A" car from the original game), as well as a "Car Attack" mode which is unlocked after the player wins his first trophy, and will see him racing against a single CPU-controlled car, of greater power. But if he beats it, it will become unlocked - and there are also a total of thirty-one cars in this game, two of which take on the form of Blinky (the red ghost from Pac-Man), and a Pooka from Dig Dug. Galaga '88 again makes an appearance as a minigame but you have to come in first on the "Ridge Racer Extreme Extra" race to reach it; if you manage to kill all forty Galagans on a "That's Galactic Dancin'" bonus stage, you shall unlock the "Team Galaga '88" car (in addition to a song called "Galaga Pac-Jam"). This was also the first direct-to-console Ridge Racer title to allow up to four players to play simultaneously of the same console ("Revolution" and "V" had allowed two players to play simultaneously of the PlayStation link cable) - and the first one overall to feature its "racing beauty" Nagase Reiko (written in Kanji as 長瀬玲子) on its front cover, who is known to arcade gamers for her appearance in Super World Stadium '99 as the Nikotama Gals' No. 3, where she was joined by twenty-two other older Namco characters.