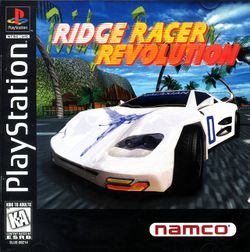 Ridge Racer Revolution is a racing game, that was released by Namco for the Sony PlayStation for Japan, on December 3, 1995 (and for the United States on September 30, 1996); it is the fourth (and first direct-to-console) title in the Ridge Racer series, and includes the 1987 arcade game Galaga '88 as a minigame. The player can initially only select from a limited number of cars to control and tracks to play the first time he plays the game, but more shall be unlocked as he progresses through it - and there are also several new songs to choose from, that are now generated by the console's PSX SPU.