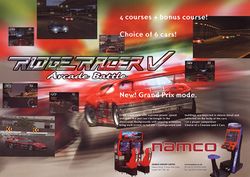 Ridge Racer V: Arcade Battle is a racing arcade game, that was released by Namco in 2000; it runs on their System 246 hardware, and is the ninth title in the Ridge Racer series. Inspired by the original Ridge Racer V, for the Sony PlayStation 2 (which had been released earlier in that year), two players (reduced from the maximum of eight supported by Ridge Racer 2 and Rave Racer) must take control of two of six new cars for racing one of five new tracks - "Park Town", "Outer Pass", "Above the City", "Bayside Line" and "Sunny Beach" (the last of which is the "short" version of the original Ridge Racer track, with updated graphics). In order to invoke "Time Trial" mode for this game, you must press and hold the "View Change Button" (which had been introduced in the aforementioned Rave Racer) after you insert a coin, and continue holding it until you have selected your car; the text "T.T" shall then be displayed on the track selection screen as a result. This is also the last arcade title for the RR series.