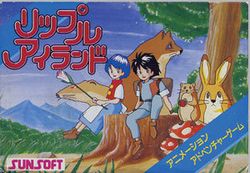 Ripple Island (リップルアイランド, Ripple Island?) is an Adventure game developed by Tokai Engineering and published by Sunsoft. The game was only released in Japan on January 23, 1988 for the Famicom. Unlike other 1980s SunSoft games like Ikki or Atlantis no Nazo, Ripple Island is a peaceful command-based adventure game where the player chooses from 5 different actions (look, take, enter, hit, and push) in order to arrive at the game's ending.

The game was originally planned for the Famicom Disk System with the title Koutei no Yami (皇帝の闇, Koutei no Yami? lit. "The darkness of the emperor"). The game enjoyed limited popularity as it was released only 18 days before the release of the highly anticipated Dragon Quest III. Though the game appears easy because of its childish graphics, very few hints are provided for solving certain mysteries, making the game's difficulty quite high. There are four different endings to the game, one of which can be seen even before the player defeats the final boss. The remaining three are decided depending on the player's actions and choices throughout the game. The staff roll is only displayed if the player reaches the game's "true" ending.

The game was re-released for the PlayStation in 2002 as part of the Memorial Series: Sunsoft Vol. 4 compilation, where it was coupled with Blaster Master. An i-appli mobile phone version which features improved graphics was also released in 2003. A manga version by one of the game's character designers, Moriken, was serialized in Wanpaku Comics (Tokuma Shoten). The character's appearances differ greatly in the manga version, and only lasted 4 chapters without reaching the conclusion of the game's story-line. 2 more chapters were added in the tankōbon release, which do describe the game's true conclusion. Both the original Famicom cartridge and manga tankōbon are rare, and can only be purchased for higher prices than their original value.

The game takes place on a small island called Ripple Island, where humans and animals lived together in peace. However, one day, the evil emperor Gerogēru (ゲロゲール) suddenly appears on the island and kidnaps the king's daughter. The king promises that he will allow whoever can rescue his daughter to marry her, and a young boy named Kyle (カイル) sets off on a long journey to rescue the princess.