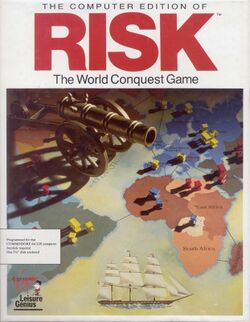 Risk is a board game developed in 1957 by Albert Lamorisse, and is a well known strategy wargame. In this board game, between 2 and 6 players are tasked with taking over the world, by sending armies from one territory to another.

This board game was ported over to the computer in 1989, providing support for human and AI players. The conversion itself seems faithful to the rules along with its variants, but its interface has much room for improvement.