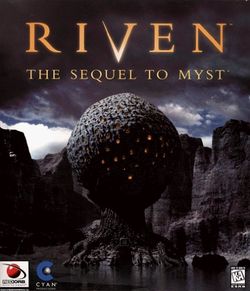 Riven is a point-and-click adventure computer game, the sequel to Myst. Developed by Cyan Worlds, it was initially published by Brøderbund. Riven was distributed on five compact discs and released on October 29, 1997 in North America; it was later released on a single DVD-ROM, with improved audio and a fourteen-minute "making-of" video. In addition to the PC versions, Riven was ported to several other platforms, including the PlayStation and Sega Saturn.

The best-selling game of 1997, Riven sold 1.5 million copies in one year. After the game's release, the Miller brothers drifted apart, with Robyn Miller forming his own development studio while the older brother, Rand, stayed at Cyan and continued to work on Myst-related products, including the novel Myst: The Book of D'ni. The next entry in the Myst series, Myst III: Exile, was developed by Presto Studios, and published by Ubisoft.

The story of Riven is set immediately after the events of Myst. Having been rescued from the efforts of his sons, the main non-player protagonist Atrus enlists the help of the player character to free his wife from his power-hungry father Gehn. Unlike Myst, which took place on several worlds known as Ages and linked together by special books, Riven takes place almost entirely on the Age of Riven, a world slowly falling apart due to Gehn's rule, and his tampering with the Age.