The stage starts out simple. At the beginning, you get attacked by thugs running up to you, which you will have to punch.

When you reach the traffic light, you will be attacked by a motorcycle. Duck and punch it as it jumps over, and punch it when it returns.

When you cross the street, you will automatically draw your weapon, which can be used against enemies in the windows. However, you will still need to punch the crates. 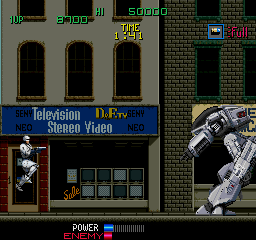 If you picked up the spread shot earlier in the stage, try to empty it as quickly as possible. Since it has a slow firing rate and otherwise does limited damage, you need to revert to the default weapon to continue.

Your opponent, the ED-209, approaches from the right. It will fire a three shot burst that is aimed downward, but can be jumped over (as long as it isn't too high). When it fires, jump over the shots and make as many shots as possible to its head.