On approach to Omni Headquarters, there are two new enemies. The first are wall turrets, and the others are jetpack-equipped soldiers.

When you approach a large doorway in the background, where the enemies attack in numbers from the windows, clear out the turrets and enemies first. The stage boss is just ahead, and you may have trouble taking them out if you run past them. 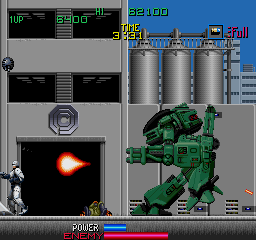 The end of the stage has an enforcement droid. When it approaches, it fires three shots which may be ducked. When it retreats, it will fire two or three mortars.

When fighting the droid, duck under the first shots, and attack when it launches the mortars.

At the end of this stage is another target practice session.