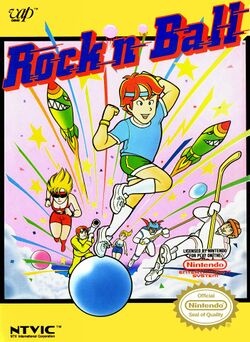 Rock'n' Ball, released in Japan as Family Pinball (ファミリーピンボール, Family Pinball?), is a Famicom game that was originally published in Japan in 1989 by Namco, and then later released in North America in 1990, published by NTVIC. While the Japanese version gave players the option to choose from several Namco mascots, they were replaced by non-specific fictional human characters in the North American version. Special guest characters in the Japanese version of the game include Pac-Man, Tarosuke from Youkai Douchuuki, Kagekiyo from Genpei Touma Den, Valkyrie from the Valkyrie no Bouken series, Wonder Momo, and Ki from the Tower of Druaga series.

Several gameplay options are availeble, such as; "regular pinball" for up to four players, "nineball" where balls are knocked into a Bingo pattern, "battle pinball" which operates more like Pong instead of pinball, and "sports pinball" where the pinball table is designed to resemble a soccer or hockey field. There are three different variations to the "battle pinball" mode; "thunder," "bomber," and the basic "attack" mode. All three of these options uses specialized flippers and a specialized pinball. For example, the "bomber" mode has a pinball that explodes after a certain time limit has been reached and the player's two target switches have been turned into bombs. A switch on the right-hand side of the board activates the special effects in the "attack" mode.

All tables except for the first selection are identical between regions. In Japan, the main table is Pac-Man themed, while in North America, it is Rock & Roll themed. Compared to the North American version, the bumpers in the Japanese version are separated further apart and the player has more room to guide their ball around the playing surface. The Japanese version has a higher overall difficulty compared to the North American version.