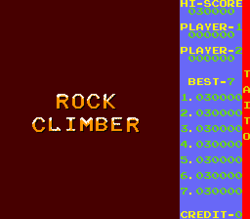 Rock Climber is a climbing arcade game that was released by Taito Corporation in 1981; it runs on Namco's Galaxian hardware (a Zilog Z80, running at 3.072 MHz, with a custom chip for sound). The player must use two 8-way joysticks to take control of that eponymous Rock Climber, each of which controls one of his arms - and as a result, the gameplay is considered similar to that of Nichibutsu's Crazy Climber, which was itself licensed to Taito America Corp for US manufacture and distribution. However, instead of having to watch out for: windows closing on his fingers, bald maniacs dropping things on him, condors defecating on him, and neon signs falling on him (along with that occasional giant gorilla), the Rock Climber must watch out for monkeys, doves and bears; there is also a radar on the right side of the screen, that shows his (and the enemies') current positions on the rock face. When the Rock Climber is hit by any enemy character, he will be knocked off the rock face, and fall down to his doom - but as in Crazy Climber, the gameplay will resume at the point where he fell off, with the most recent "major" danger eliminated. Once the Rock Climber reaches the top of the rock face there shall be no helicopter waiting for him like there was for the Crazy Climber; he will merely proceed to the next stage, which shall be harder than that he just cleared. There is also no speech.