Developed by Atari in 1979. Like all home conversions of Asteroids, all of the objects are solid, as opposed to outlined in typical vector graphics fashion. Just about every feature converted to this version. Because of the limitations of the system, when a medium asteroid is hit, only one small asteroid appears. While some game selections on the cartridge have Hyperspace, other selections provide alternate abilities such as Shield (which was officially incorporated in Asteroids Deluxe), or a simple 180 degree flip. Some versions featured no extra ability. For one or two players.

Developed by Atari in 1981. While this version has more features than the 2600 version, and higher resolution, some feel that it actually looks worse due to every Asteroid being the exact same color of light blue. When the asteroids cross one another's path, they seem to disappear at the unions. Nevertheless, Asteroids on the Atari 800 allowed up to four players to play together simultaneously, either cooperatively or competitively, quite a feat for the time. This was also the version that would have been released on the Atari 5200 if it was deemed playable, but the unforgiving non-centering controls made game play too difficult, and the 5200 version was canceled. 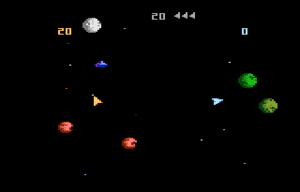 Developed by Atari in 1984 (but released in 1986). This version of Asteroids was intended to show off the graphical capabilities of the Atari 7800 over the previous Atari consoles, and featured richly animated spherical asteroids that appear 3D in appearance (the prototype was known as 3D Asteroids). The game allows two players to play together in a variety of ways, alternating, cooperative, or competitive, and at four different skill levels.

Developed by Accolade in 1992. This version is fairly well done, and seems to pick up graphically where the 7800 version left off. Due to the smaller screen size (and the seeming enlargement of the player's ship), maneuvering around the screen can be a little more dangerous than usual. Through the use of the Game Boy link cable, two players can play, either competitively or cooperatively. 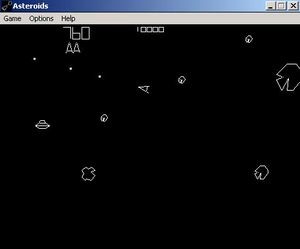 Developed by Microsoft in 1993 as part of Microsoft Arcade. Unlike most other versions, this was entirely reprogrammed to simulate the original, rather than being based on the arcade version's code. The menus contained the original's dip switch settings.

In the absence of an official Atari 5200 release of Asteroids, Electra Concepts developed Meteorites in 1983. It contains all of the elements of the arcade, but presents the Asteroids as pseudo three dimensional spheres.

Using the visual presentation of the Vectrex, John Dendzila created what can probably be considered the most accurate home conversion of Asteroids ever made. Named Rockaroids, this conversion of the game presents the game in the same visual fashion as the arcade, and even mimics the control scheme, relying primarily on buttons. It is contained on the "All Good Things" cartridge, the first 16K Vectrex cartridge. The game has been remade, with the second version being a little more intense than the first, and the third version playing a lot more like Asteroids Deluxe.