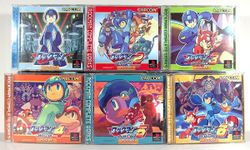 Rockman Complete Works is a lineup of video game remakes released for the PlayStation in Japan of the first six video games in the original Rockman series (Mega Man in the west) by Capcom. The six games were released individually at the same time, each disc containing the original Famicom version of the game as an "Original Mode", as well as a "Navi Mode" that features a "hint system" in which a supporting character in each title gives tips to Rockman (Mega Man) via a communicator, as well an updated HUD and an arranged soundtrack, along with other optional game modes.

The games are compatible with the PocketStation peripheral, specifically allowing the player to match up bosses from the games in a paper-rock-scissors minigame called Pokerock. Players can even play against one another via the PocketStation's infrared sensor.

The 2004 compilation Mega Man Anniversary Collection released in North America, feature the Complete Works versions of the first six Mega Man games, including fully localized "Navi Mode" for each game, although most of the features were left out.