Blessings are special items that are received after praying at a Spiritual Shrine. They are placed in the slot adjacent to the spell slot, and are either lost upon death or destroyed after one use. Picking up a second special item will replace your first one.

Hermes' Boots Regular spikes can be walked on.

If a Paladin blocks while standing on floor spike's it will activate the shield and use mana. 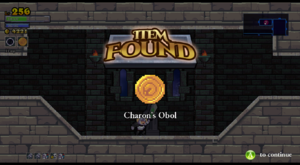 Oh hoh ho! So you have my obol. I will let you pass for free, but only this one time.

The Hedgehog's Curse Taking damage will result in you dropping coins (coins dropped can be more than what you lost) , much like a certain, well-known blue hedgehog.

Compass appears at the top of the screen, pointing to a hidden location. Press up to enter the secret door. The secret room will contain 2 chests. Usually Blueprints or Stats up.

Nerdy Glasses Corrects the Color Blindness, Nearsighted, Farsighted, Nostalgic and Vertigo traits. It also makes hidden items visible and allows for the player to see the correct chest in the 3-chest gamble game.

Helios' Blessing Much greater chance and quantity of gold dropping from enemies (Does not affect chests).

Hyperion's Ring Defies Death once (revive at 25% HP on death, used automatically, consumed on use)