The NPCs outside Castle Hamson, except for Charon, are characters that the player will unlock through upgrading. NPCs in the castle host different sorts of carnival games which allows the player to increase the amount of gold earned on that specific run (these bonus games can only be played once per run, and re-exploring a locked castle will not allow you to play a game you played with a predecessor). 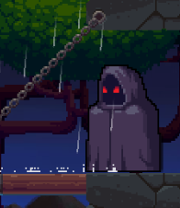 Charon at the gate of Castle Hamson.

The first NPC that you meet at the gates to Castle Hamson. He takes 100% of your gold if you choose to pass and lets you into the castle. He locks the door behind you. The 100% gold loss can be reduced with upgrades to Haggle in the Manor. The lowest percent he will take is 70%.

Charon is the cloaked, gloomy looking guardian who blocks the entrance into the castle. He will demand all your gold for passage each time you attempt to enter the castle, and will continiue to stand there until you do.

Charon, in greek mythology, is actually the ferryman of Hades who carried the souls of the dead across the river Styx. In the mouths of the dead, a coin (usually an obulus) was sometimes left, to pay Charon for passage. This is probably why the item "Charon's Obol " lets you pass him, and also explains why he otherwise demands your gold.

By upgrading the skill called "Haggle", you lower the toll of Charon's entry fee by 6%. This skill can be upgraded five times (total of 30 % cost reduction).

This is an item that can be found within the castle walls by praying at the Spiritual Shrine, and it will be inherited by your next heir. It will allow your heir to pass Charon without any fee if you die with the Obol. He will acknowledge your holding of his Obol, and will allow you to pass this one time, and the item is gone after.

Oh hoh ho! So you have my obol. I will let you pass for free, but only this time.

These vendors are only available after unlocking them through the Manor. 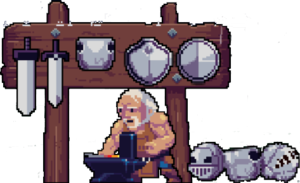 Blacksmith at his shop.

To understand the effects of the armor see Stats and Enchantments

The Blacksmith is the first upgrade in Rogue Legacy. The Blacksmith sells armor and weapons. The blacksmith has 15 items for each tab and there are five tabs including swords, helmets, chestplates, limbs, and capes. You must find blueprints from chests to unlock more gear, and purchase them to be able to equip them (more than 1 playthrough is needed to acquire all the blueprints.) The Blacksmith will only start with Squire Sword, Squire Helm, Squire Chest, and Squire Limbs unlocked, though they must still be purchased to be used.

The items mainly increase in strength/usefulness as they go across from left to right, and from the first row to the second, however the third row often forfeits general power over a specialty (first third row items give reduced stats, but +1 in Vampirism). 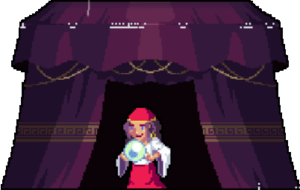 Enchantress outside of her tent.

The Enchantress is one of the first upgrades in Rogue Legacy, and is found on the right side of the Manor. You can buy and equip runes from her.

Enchantments of the same type stack, and increase the abilities of the enchantment.

The first rune you purchase will cost 175 gold, and the price will increase by 175 for each rune you buy (e.g., your fifth rune will cost 875 gold). This results in the last rune costing a staggering 9,625 gold, and the total cost of purchasing every rune sits at 269,500 gold. 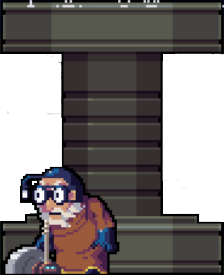 Architect next to the lock machine.

The Architect will lock down a Castle layout for you so you can redo it and look for what you previously missed, the price is that you will only receive 60% of the gold you would normally obtain and you can not re-loot chests.

Chests cannot be looted more than one time and hence will be found open, however all environmental objects and enemies will respawn.

Booyan is a clown found randomly in the game. He offers you the option to play a random minigame (one of two) whose reward depends of the score you finish with.

For a perfect (or close to) score you get a Mini-Boss Chest.

Trivia: The name is a reference to the 1982 game Pooyan where the aim is to shoot the balloons of wolves coming down to eat you.

You have to throw knives from behind a barrier at moving targets. Each new target is positioned at a different distance and moves with a differing, and always increased speed. The first target hit gives the player ten coins, and for each target hit, the next gives an extra ten coins (10, 20, 30, etc.). There is a total of 8 targets you can hit and you have 12 knives at your disposal (Booyan incorrectly says you have 10 knives). If you manage to hit 8 or more targets, you earn an additional iron chest.

A variant of the throwing knives game. There are 100 stationary targets in the air in the sideroom. You have 5 axes to launch at them which break everything in their way and act just as the normal axe spell does. The gold reward depend on how many targets are left. If you manage to hit 90 or more targets, you earn 460 gold, and an iron chest.

Because you're not immediately transported to the room, you can stand in the middle of the partition between the two rooms and jump and throw an axe (especially easy if you are Half-Dragon with fast mana regen), and can knock down a column and a bit of the targets, reducing the efficiency of the axes required to get the top prize.

Bug: Barbarian Kings/Queens can shout and destroy all targets. (Fixed in Patch 1.0.10)

Bug: Conflux can be used right before talking to Booyan to destroy a large number of targets. 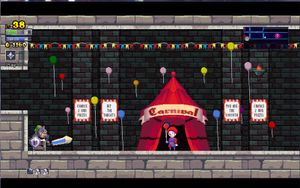 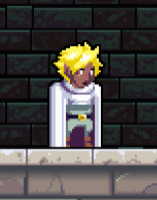 The elf will let you trade a quarter of your gold for a chance to open 1 out of 3 chests and win triple what you spent. The other two chests contain nothing.

Statistically he is offering a fair deal, and a successful guess with him can give the player enough gold in one run to buy an expensive upgrade in the Manor.

Increasing Bounty increases the efficiency of this room; for example, gambling 1,000 gold will cause the chest to open and contain the equivalent of 3,000 gold in coins, coin bags, and diamonds. However, with a Bounty of 100%, the gold picked up will be worth 6,000 in total. This means that generally, if you have a decent amount of Bounty, gambling is a good idea.

Trivia:  The elf's dialogue when you lose ("You soooo stupid!") is a reference to the movie UHF .

Note: His service can be used only once per dungeon. Revisiting a locked down dungeon will not allow a player to retry. However, he can appear several times in a single run.