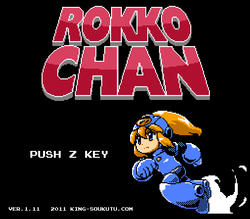 Rokko Chan is an action-platformer game created in 2011 in Japan by King Soukutu. It is a Rockman Doujin Software, that is a Japanese game heavily inspired by Mega Man.

Prof. Thane created a robot with artificial intelligence and the aspect of a young girl. He named it Rokko Chan.

Rokko Chan plays similar to Mega Man 3. The hero can shoot up to three bullets, but she cannot charge her Rock Buster. Instead of sliding, Rokko Chan can dash and perform dash-jumps.