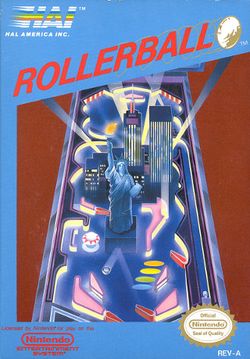 Rollerball (ローラーボール, Rōrābōru?) is a video game produced by HAL Laboratory in 1988 for the NES. It is a remake of a title released four years prior for the MSX and the Sharp X1 home computers. It is designed to be played by one to four players, in turn. It is an emulation of a pinball machine.

The pinball machine rendered in Rollerball is composed of four screens, which, by proportion, would be about as long as two standard pinball tables if it were a real table. The graphics on two of the four screens are based on various aspects of the New York City skyline. The topmost screen (hereafter called the bonus screen) merely shows some clouds and a blimp. The second screen (the top screen) shows the top of the Empire State Building, while the third screen (middle) shows the lower skyline and the Statue of Liberty. The lowest (bottom) screen shows only a blue backdrop, representing the Ocean.

If the ball passes the flippers on the bottom screen, on either side or between the flippers, it is drained and the end-of-ball bonus is calculated. A tally of the current bonus is kept during gameplay and shown on the lower screen; this bonus starts at 1,000 points and is increased in intervals of 1,000 points during play. Upon draining the ball, the bonus is counted down to 0 points and added to the player's score; to represent any increase in the bonus multiplier, this count is repeated. The bonus multiplier can be increased by finishing the bonus game more than once, or by receiving three cherries or three bells on the main screen slot machine.

The game ends after three balls (in addition to any extra balls from the bonus screen) are drained; a typical final score can be around 300,000 points. Scoring 1,000,000 points enables the credits after the final ball is drained. 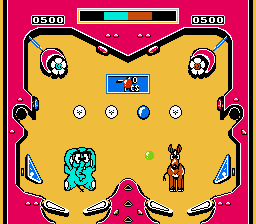 The alternate mode is a two-player game called Match Play. In this mode, a much smaller table, only one screen tall, houses a number of buttons and switches that lower the score of the player on that side by various amounts. Four sensors in the middle of the table will switch the scores of the two players whenever they all become lit. A slot machine is spun by the buttons on the outer walls, and its bonus is enacted by hitting the button on the top wall. The first player to lose all his or her points loses.

Two animals in the middle of each player's area show an emotion, from ecstasy to sadness, through neutral indifference, depending on that player's score and the score margin between the two players. In the Japanese version, the left player's animal is an elephant, and the right player's is a giraffe. In the English version, the giraffe was changed to a donkey, likely in reference to the Republican and Democratic U.S. political parties.