You begin the game at the left end of a long hallway. Doors line the hallway, and there are stretches where a second story is visible above the ground. You will first encounter the most basic type of enemy, the purple hoods which have no special attack, and are defeated with one bullet. Shortly after you fight a few of these, you will encounter the enemies in yellow hoods. While they have no special attack, they require two bullets to defeat. Getting hit by one bullet will only knock them to their knees before they recover and stand back up. Get to know the behavior of these enemies.

It’s not necessary to kill every enemy, just every threat. Only experience will teach you whether an enemy is a potential threat, or if they are just milling about. Enemies standing on platforms above you may decide to drop down. Enemies standing below you may jump up to your level. Count on at least one enemy exiting through each door that you reach. For this reason, it’s a good idea to stop just before every door and allow an enemy to walk through so that you can quickly shoot it and eliminate the danger of getting ambushed as you pass the door.

As you make your way to the right, you will see a sign indicating that there’s an ammunition cache behind a door. Press up in front of the door to enter and obtain fifty more bullets. You will eventually come out automatically, but you can hold the joystick up if you are concerned that an enemy is about to walk in front of the door, and you want to wait for him to pass. A little further down the hall will be another sign indicating the presence of another weapon, the machine gun, and 100 rounds. Collecting this weapon will make it easier for you to mow down large groups of enemies. 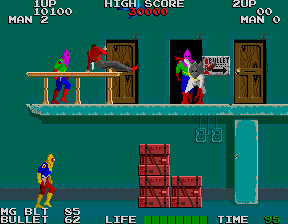 Be careful not to get surrounded when changing levels.

Ordinarily, you can only enter these doors and collect their contents once. However, if you wish to take extra advantage of this weapon, you can walk forward to the start of the next second level platform, and then return to the door. If you advanced far enough, you will trick the game into thinking that this is the first time you’ve been through this door, and it will award you another 100 rounds of ammunition. By moving quickly, you can make use of this trick to obtain over 200 machine gun bullets before you are pressed for time and must advance.

Eventually, you will meet other types of enemies including orange hoods in red suits who carry a gun and will fire it at you, but they are defeated with a single bullet. This compares to the blue hoods in purple suits who also carry a gun, but take two bullets to defeat. There is also the gray hoods who lob grenades at you. They are defeated with one bullet. You are likely to encounter larger groups of enemies at you continue down the hallway, so make efficient use of the machine gun bullets to clear the path ahead of you. When you reach the end of the hallway, you will encounter a flight of stairs. One lone gray enemy awaits you on the opposite side of the stairs. Then hop down to the bottom to proceed through the second half of the stage. 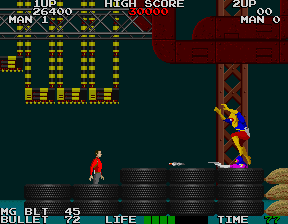 Time your attacks on enemies that duck inside the tires.

Continue to stop before every door and allow an enemy to exit before pressing on. Eventually, you will reach a set of tires piled up on their side. Though not visible from the player’s angle, they are in fact hollow in the middle, allowing Albatross and enemies to stand or squat inside the gap. Enemies will use this to their advantage by squatting down and standing up to fire a weapon at you intermittently. Carefully time your shots at them so they get hit when they stand up, and squat down when they fire a bullet at you.

After clearing the first set of tires, you will have to cross a mix of tires and sandbags. Ultimately the tires will cease, and you will only encounter sandbags on the floor. Keep your eyes on any enemies who will be approaching you on foot, especially if they are on a different level from you. If they are below you, wait until they leap in the air before shooting. If they are above you, travel back to a section where the ground is more level, and you can safely put some space between you and any threat.

Once you make it to the end of the sandbags, you will see a door to the right. This is the stage exit. Clear away any enemies that stand between you and the door, and approach it when it’s safe.

This stage has the same core design as Area 1. However, most of the sections beneath high platforms have been fenced off to create foreground and background space. You will be forced to contend with the same issues that were introduced in the previous stage.

This stage will be crawling with enemies. It is important to identify which path you wish to take and stick to it in order to avoid any encounters with enemies that might become fatal. Whether you choose the upper path, or the background below the first platform, there is an opportunity to earn more ammo, but it is significantly less ammo than you would have received earlier in the game. Unless you collected a lot of bullets in the first story and haven't lost them, you'll need to visit as many ammo rooms as you can find, and use your bullets sparingly. 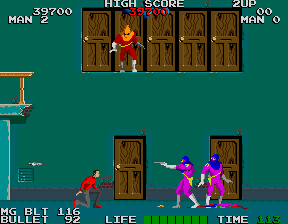 Watch out for enemies which appear from the upper doors.

Not long after you start, you'll reach the first machine gun ammo door in the same place you found it in the original stage. Be sure to step inside. Not far after that, however, you will see a big change in the level layout. Five doors have been added near the ceiling of the stage. Enemies will appear out of a few of them and drop down to attack you. Be sure to watch which way they leap and get clear of them as they land on the floor.

You will continue to face stiff opposition as you proceed to the right. Note that enemies who fire guns will frequently fire two or three bullets at a time. Be careful leaping down the large segments of floors to the second portion of the stage. After a short distance in, you'll notice another new feature: ceiling mounted lasers. These objects fire beams at the floor at regular intervals. Watch a few of the beams first to get their timing down, and then jump through the space between two beams. Keep an eye on the door ahead so that you don't leap into an enemy who is exiting. 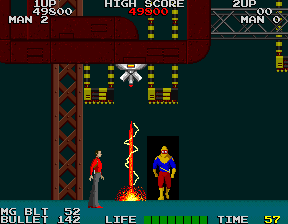 Time your passage between laser beams.

Things will get incredibly dangerous once you reach the tires. There will be more ceiling lasers, one after another, along with more enemies who will crouch down and stand up to shoot at you. You'll have a lot to dodge, so proceed through this section slowly and carefully. Take out any gunmen before you attempt to deal with any of the lasers. Even if you pass one, stop and make sure that you clear away any other enemies who approach you before jumping past the next laser.

Another ceiling laser will be mounted above the second tall stack of tires. There will be a gunmen firing at you from inside the tires. Take him out and get across the tires between laser fires. Another enemy will rise up from the lower portion of the tire and fire at you, so be careful. Duck down and turn around to take him out between shots.

As you cross the pile of sandbags, you may feel like the enemy presence is a little low. In fact, the area is crawling with enemies, but most of them are on the floor behind the sandbags where you can't see them. They will jump up in an attempt to ambush you. Once again, you must proceed carefully, and try to lure each of them out one at a time so that they don't overwhelm you. Once you reach the end of the sandbags, the exit from this stage will be in sight. Get to it as quickly as you can and the enemies around you will disappear.