Stage 2 starts out in a similar manner to Stage 1, but the first level above the floor is actually too high for you to leap up to. It will contain a gray hooded enemy that drops grenades to the floor below. You’ll have to cross the floor to another section that’s lower which you can reach by jumping. On the way, you will face a wide array of enemies, including a white masked enemy who will shoot you while squatting down. You must be very careful to watch out for this enemy and jump over his bullet as you can’t duck under it. If possible, send a number of bullets ahead of you in hopes of striking this enemy down before he has a chance to shoot at you. 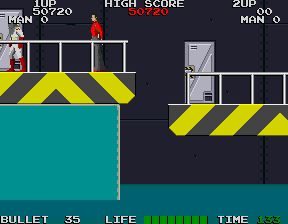 Time your approach back to the left carefully.

Once you reach the second ledge above the ground, more grenade dropping enemies will attempt to stop you. Time your approach between grenade explosions, and jump up when you are on the far right side. Turn around and shoot all of the enemies nearby. Then run to the left and jump up to the higher ledge. Take out the enemy there and step inside the door to obtain eighty more machine gun rounds. You can walk forward, past the yellow and black column hanging from the ceiling, and then return to this door a few times to boost your ammo even higher if you wish.

Once you’re done collecting ammo, keep walking to the right, where you will walk alongside a large collection of boxes and crates. Many of these boxes can be jumped on and travelled upon. Enemies will also take advantage of this fact, so be on guard for enemies who come from the boxes above as well as from the ground. You are vulnerable to attack from enemies on the ground while you stand on the low boxes. As you continue, the boxes will begin to stack very high and actually create a path that will take you above the top of the screen. You can even hold up while jumping to leap higher than usual. Just watch out for any enemies that might be waiting for you above. 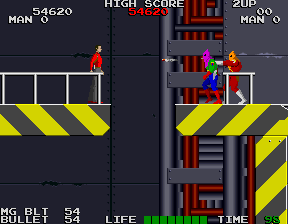 Clear the enemies before trying to cross the gap.

When you reach the top, you’ll be able to leap up to a platform above you. Walk to the right, and shoot any enemies that approach you from the right beyond the gap. When the coast is clear, jump across the gap, making sure that you jump from the very edge of the left platform in order to reach the other side. Once you cross the gap, watch out for enemies positioned lower than you on the platform ahead. Take them out carefully as you continue to the right.

After you cross to the right, you will encounter a railing. While you can continue all the way to the right, and climb down a set of stairs, it’s faster, and actually somewhat safer, to leap over the side of the rail and drop down to the level below. Throughout this entire descent to the exit at the bottom, you should always attempt to take advantage of the placement of rails as a means to shortcut yourself to the bottom. 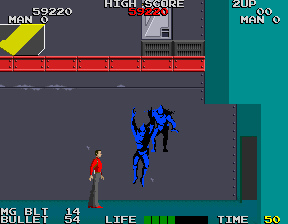 Ninjas will appear and attack just before you escape.

When a rail is not available, you will have no choice but to climb down the stairs. As you do, you will see enemies waiting for you. However, as long as you stand on the raised landing of the stairs, you are safe from their attack. Wait until the enemies edge closer to the stairs, and away from the wall. Then leap over them and turn around to shoot them before they can react. Continue doing this on each floor where you can drop over the side of the railing.

When you finally reach the bottom, it may seem as though the coast is clear, but in fact three ninja-like enemies will warp in and appear just ahead of you. You’ll have to react quickly to stop your advance and shoot them before they have a chance to attack. Take all three out, and then head through the door.

This stage will start out nearly identically to the second stage, but after you get a little further in, you will see how the increase in enemy appearance makes passage through it trickier. There will be more grenade-throwing enemies posted on the platforms above the floor, making it harder to reach the machine gun ammo door back to the left along the high platform. Time your approach carefully. 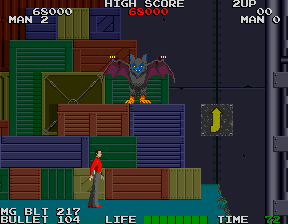 Watch out for the additional Gelzos that occupy the crates.

After you get through the first section, you'll move on to the hallway of crates. In addition to the increased presence of masked enemies, you'll also have to contend with a few extra bet-like Gelzos. They initially appear on top of boxes, which makes it possible to remove the majority of them before they get the chance to take off in flight. If they do manage to rise to the ceiling, try to advance far enough into the stage where the crates are stacked up, leading to the high platform above the top of the screen. You can shoot most of them down before they have a chance to dive at you, but you must safely make it to this point while dealing with all of the other enemies in the stage. 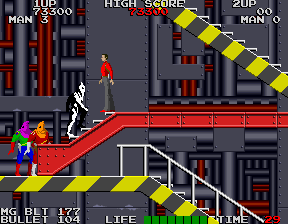 Stronger ninjas will appear to face you on your way down.

Jump up to the very top where the ledge is, and walk to the right. Shoot the enemies across the gap, then leap over. As you take out more enemies, you'll be visited by another enemy who wasn't here the last time: the Blogas. Remember to squat down and shoot low so that you remove them as a threat before they get the chance to leap at you.

Once you reach the section with the railings, remember the trick of leaping over the side of them as a means to shortcut most of the last section of this stage. As you make your way down, be prepared to face more Blogas. In addition, more ninjas will appear, in more powerful forms than just the one-hit blue variety. Be prepared to take them out and clear the area before you proceed. Eventually, you will reach the bottom of the floor. As you approach the door to the right, anticipate the appearance of a few more ninjas, and shoot them as they materialize.