Compared to the previous stages, this stage is one long horizontal hallway with no vertical component. You will be introduced to a couple of new enemies, and you will encounter the first new enemy very early on. They are the Blogas, the hunched over yellow skinned mutants. The Blogas are incredible leapers, and are fond of surprising intruders by leaping at them from across half the screen. They only take one bullet to defeat, and they die in a burst of blue flame. They only do half of a meter's worth of damage to you with one hit, but they can actually kill quite easily because there's almost no time between the first and second hits. 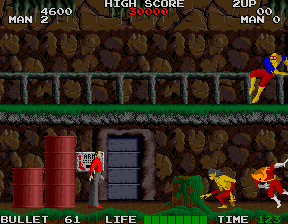 Clear away the Blogas threat before collecting ammo.

Because they are hunched over, shooting at them while standing will rarely work unless you manage hit them mid-jump. Instead, you should squat down and fire at them as soon as one appears on the screen. They rarely appear on upper ledges, so you can try to occupy the upper levels and wait for them to jump up to meet you before attacking them. Every enemy is a threat, but you should take Blogas very seriously, and focus on removing them before advancing.

You will pass a pistol ammunition door very early on, and a machine gun rounds door not long afterwards. Watch out for the Blogas that attempts to reach you by jumping over the tall stack of barrels. Remove him before approaching the door. Not long after, the ground will raise up slightly, and the upper ledges will disappear. More Blogas will appear to jump at you, so be fast on the trigger and take them out before they have a chance to leave the ground. 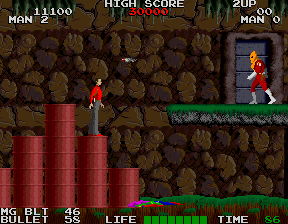 There's another chance to get machine gun ammo beyond here.

Eventually the upper ledges will return. After jumping over a pyramid of barrels stacked between two high ledges, the second ledge will have another chance for machine gun ammo behind the farthest door. Be sure to take out all of the enemies around you before approaching and entering the door. 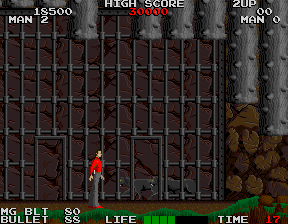 Watch the panthers behind the cage carefully.

Beyond the second machine gun ammo door will be a set of gray spiked columns. As you approach the highest column, the next new enemy will leap toward you: a black panther. A large number of these felines occupy the remainder of the stage. They are quite fast, but not really as deadly as the Blogas. Panthers will try to leap up if you're occupying a higher ledge than them. You'll have to squat down to shoot at them, but as long as you defeat them quickly enough, they shouldn't be able to pose a large threat to you.

After passing through another split level section with more panthers, you will reach a holding pen where many panthers pace back and forth. The gates to the pen are open, so the panthers may choose to exit and attack. Likewise, if you're feeling brave, you can enter the pen. From that point on, there are only a few human enemies between you and the exit. Advance cautiously and remove each threat as they appear until you arrive at the end.

While this stage starts out like area 3, the increase in difficulty is dramatic, especially towards the end. In fact, unless you move through this stage at a steady clip, you may run out of time. However, trying to move too fast may cause you to make reckless mistakes that will get you killed, so you need to strike a good balance between progress and caution.

Right when you begin, you will be attacked by not one, but a sizable pack of Blogas. Be ready to squat down and fire at them. Clear the area of masks and Blogas before ducking into the first ammo door. From there, proceed cautiously, taking out every enemy on the way to the machine gun ammo door that follows. 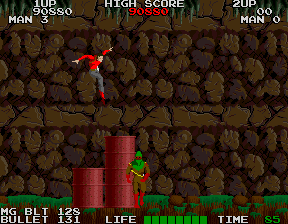 High jump off this barrel to confuse the grenade thrower.

After you get clear of the platform above you, the level flattens out just like before. However, you will approach a stack of barrels, and on the other side will be a collection of enemies, including one green mask who likes to toss grenades over the barrels. There's only sure-fire way to get past this enemy without taking damage. You may need to back up and return to do it properly. Run to the right, and immediately jump on to the lower barrel. As the green mask prepares to lob the first grenade, hold up and jump. Doing so will confuse the enemy, and cause him to stop throwing grenades. He will approach the barrels, and then walk away to the right.

Don't forget that more Blogas will be approaching you from the right after you clear the barrels. Continue walking to the right to reach the next set of platforms, but be prepared: two Gelzos will fly straight toward you along the bottom, the second of which must be shot low. Clear them out of the way, along with any other enemies, and jump up to access the second machine gun ammo room.

Proceed to the right, over the pyramid of barrels, and be careful when traveling beneath the next platform, as a pack of Blogas will rush towards you. Jump up to the second column and wait for the first panther that appears to leap over you. Climb up to the top and take out any panthers that you can before dropping to the floor and continuing. More panthers will attack, including one which launches at you from a high platform. It will sail over your head if you keep moving. 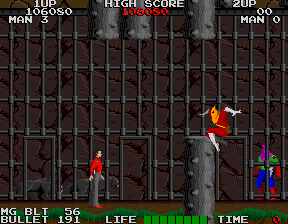 You must enter the panther cage to pass the column.

Eventually you will reach the panther cage. At this point, the stage arrangement takes a big departure from Area 3. For one thing, visiting the inside of this cage is no longer optional. You'll have to step inside in order to get around the column in the middle of the ground. Walk up to the column and then double back. When you reach the edge of the cage, it should be safer to enter. When you do, turn around, squat down, and shoot the closest panthers. Keep going, attacking the panthers as you advance, and the occasional mask enemy. Step back outside, and continue right. 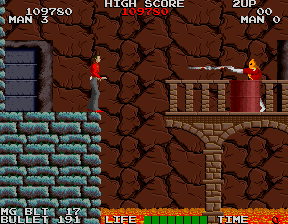 Shoot this enemy as quickly as possible.

It's not over yet, there's much more to this stage. Many armed enemies will approach you. Avoid their bullets and shoot them as soon as you can. They may shoot high or low, so be prepared to duck or jump as needed. You will reach a set of stairs. Jump up to the top and watch the door below. An enemy will pace back and forth and jump off, allowing you to drop down. When you reach the second step, prepare to shoot the gunman across the gap behind the barrel. Once down, jump across the gap before an enemy approaches you from behind.

As you reach the opposite edge of the platform, a Fire Man will leap toward you. Shoot it down and watch out for the bursts of flame that result. From there, you must jump down to the small ledge just above the lava. To make matters worse, a Gelzo is flying back and forth down there. Jump down when it flies to the left, then land and turn around to shoot it before it comes back to you. When you jump up to the next column and the step ahead, another Gelzo will be flying above. Shoot the enemy that comes from the door, and the Gelzo as it approaches. 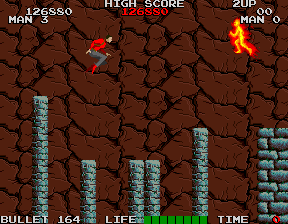 Shoot before leaping to safely kill this Fire Man.

Walk across the platform, and jump over the gap. You will be at the first of three doors. As you jump in front of each door, wait for an enemy to walk out, and shoot it before continuing on. After the third door, you will reach a set of doors. The first one contains machine gun ammo, and enemies will pour out of the rest. Pass them once you're sure it's safe an no more enemies will appear.

Jump across to the bridge. Fire Men will be bouncing all around this section. Make sure you eliminate every one of them before attempting to continue to the right. Then very carefully jump to the single-width column over the lava. Two more Fire Men will appear. Shoot them down before jumping up to the next column. Another Fire Man will fall into the lava. Before you jump off this column, you must shoot to the right. Jump off as you follow the bullet, and it will strike the last Fire Man. Then the coast will be clear to exit this difficult stage.