Stage 4 has a similar layout to the first stage: two horizontal sections joined by a vertical drop. Each section will introduce one of the hardest enemies in the game. A variety of different colored masks will greet you at the entrance. It won't take long before you reach the first ammunition room. While you're in there, two yellow masked enemies will drop down from the ceiling. Remove them and jump up to the peak of the highest column. Shoot to the right, and you should actually be able to remove the first of the newest enemies, the bat-like Gelzos.

It is worth any effort to remove the Gelzos as early as possible. Once they get flying, it's extremely difficult to remove them until they decide to dive towards you. After shooting the first one, drop down to the next column. Fire off a bullet to the right and jump after it. If done correctly, you should also be able to nail the second Gelzo before it takes off. After that, however, you'll have to prepare for a battle with the rest. 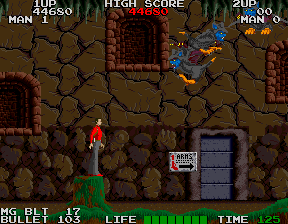 Prepare to take the Gelzos out when they dive.

Walk to the tree stump to your right, as three more Gelzos take to the air. Jump on the stump and wait for the Gelzos to fly to both the left and the right. After crossing above you two times, they will begin their attack by slowing down, and diving at you. You must be prepared to fire at them as soon as they are within the range of your gun. If you are too late, you will get hit and lose half of your health meter. Take out those three, and walk to the next ammo door. Some human enemies will approach while one more Gelzo will fly above you. Wait for the Gelzo to dive, then shoot it. That will be the last Gelzo you need to worry about for a while.

When the coast is clear, enter the door to get machine gun rounds. After only a very short walk, you'll reach another ammo door, this time for regular bullets. Shoot the enemies that comes out of the lower door first, then jump up to the door. Be careful of the enemies which come out of the next two doors, and jump up the set of gray columns. On the other side of the columns will be a green masked enemy, a grenade tosser that takes two shots to beat. Be careful because if you wait too long to attack him, he will get into a steady rhythm of lobbing grenades at you, and you'll have to back up to clear him away. Jump over the column and knock him out. 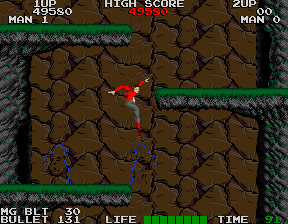 Watch out for the ninja that materialize when you fall.

You will now be in the vertical section, but it's very short. In fact, you can fall most of the way through it without having to worry too much about getting attacked. As you fall, ninjas will appear. You can only safely fall through their appearance if you hold the joystick right as you fall. When you land, remove as many of the ninja threats as you can, then drop to the bottom and continue to the right.

As you proceed along the new horizontal section, you will be attacked by a set of regular enemies, ninjas, and Blogas. Do not attempt to travel too far with too many threats on the screen at once. Remove them and proceed slowly so that the enemies can't gang up on you. You will reach another ammo door before you need to jump up on to the tops of some columns. After another ninja appears above the columns, a few black panthers will be roaming the ground below. Continue walking right and you will approach another staircase of columns. One more panther will leap from the top, and you should safely walk below it as long as you don't stop. 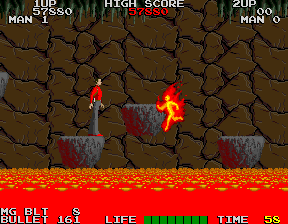 Shoot the Fire Men that threaten you as early as you can.

Beyond the next set of columns, you will reach a bed of lava, where a new enemies lives, the Fire Men. Fire Men leap above the lava with ease. When shot, they break up into a set of three flames. The flames that land on solid ground turn into new Fire Men and rise up to the ceiling, creating a second threat that Albatross must avoid when attacking these enemies. From the highest column, you must leap over to the floating platform, while watching out for any Fire Men that approach you. Jump from platform to platform until you reach the next set of columns. Realize that not every Fire Man that appears will actually threaten you.

When you land on the next set of columns, a ninja will materialize above you. Remove it before leaping to the next set of platforms. When you land on the second platform shoot to the right in an effort to hit the next Fire Man that is about to approach you from a safe distance. Another Fire Man will leap below you. The next one has the potential to harm you, so be sure to shoot it before you leap up to the high platform. Many Fire Men after that will simply fall into the lava below.

When you reach the end, you will see a set of columns creating a downward staircase. Two Fire Men will be bouncing back and forth. Once again, it's important to shoot at them from as far away as possible so that you don't get hit by the fire that they create. Once the two Fire Men are removed, the coast will be clear and you can approach the level exit.

Unlike all of the other areas in the second story, Area 9 is the only one that does not resemble it's first story counterpart. Instead of taking place in an underground cavern, it takes place in an alternate location of the hideout. It's quite long, with three horizontal stretches connected by two vertical drops. However, there are numbers on the wall which count down from 10 to 0 to let you know how close you are to reaching the exit.

This level is difficult, but compared to the previous level, it's a little easier. The level starts out with two Fire Men bouncing along the upper portion above the entrance. Shoot them from a distance and watch out for the green hooded enemy that comes up behind them. A gray hooded enemy will be waiting below by a ceiling mounted laser. Time your passage through the laser, and be prepared to face more green and gray maskers through the following section. 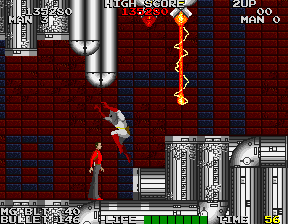 Time your passage between these lasers carefully.

Walk up to the door, wait for an enemy to appear, shoot him, and proceed down the shaft. On your way down, a few ninjas will materialize. Two purple ninjas and two yellow ninjas will appear around various platforms on your way to the bottom. Once you reach the lowest level, you will have to pass through a pair of ceiling lasers. Jump to get past both of them in one fast motion, but watch out for more ninjas that appear on the other side. Another ceiling laser will be a short distance away.

After collecting machine gun ammo, you will approach another pair of laser beams. These laser will fall to different heights. As a result, they will fall out of sync with each other. Timing your passage through these beams can be tricky. You want the first beam to be just a little ahead of the second beam. Jump on to the first step when the first beam disappears, and jump up to the second step as the second beam is finishing up. 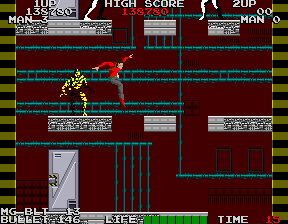 Avoid running into the deadliest ninjas.

The next set of lasers can be bypassed by taking the lower section occupied by more enemies. Naturally, another enemy will appear from behind the door when you reach it. Ultimately, there is a laser on the lower path, but it should be easy to pass through. The next vertical drop comes up shortly afterward. In this drop, you will encounter the strongest variety of ninja, the white suited ninja which takes four hits to defeat. They can also carry guns, so be very careful around them.

Two Fire Men will materialize from the floor once you reach the bottom, along with a white masked enemy. Take them all out carefully, and proceed to the right. You will come upon the last two laser beams that you must pass. They are located close together, and you must time a jump through them very carefully. On the other side, many ninjas will appear in an effort to prevent you from exiting the stage. In addition, to Gelzos will fly up from the floor. You can wait to attack them, or rush through the ninjas to get to the door before they have a chance to dive.