Stage 5 expands upon a concept introduced earlier in the game by the panther cage. This is the concept of foreground and background. The floor below the upper level of platforms will be fenced off, with doorways that allow you and the enemies to pass between the space in front of the fence and the space behind. Note that enemies in the background can’t attack you in the foreground unless they pass through the doorways, and vice versa. 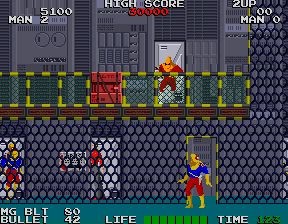 Be sure to collect machine gun ammo from here.

The fenced off areas often offer larger caches of ammunition than the more exposed doors, giving you incentive to cross through the entrances and examine the doors you find. Large collections of enemies will occupy both the foreground and the background, so clear out as many enemies as you can before trying to explore any doors.

Below the second upper platform, you’ll find a machine gun ammo door near the end. Clear away any enemies, and enter inside to collect 80 rounds. Then step outside, and approach the crates to the right. Watch out for the particularly dangerous enemies on the other side, and time your drop down to the right between gun shots. You may wish to walk back to the machine gun door repeatedly to collect more bullets. 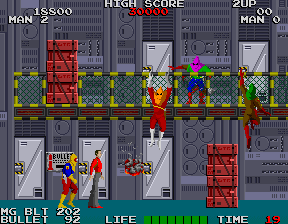 Navigate around the crates and through this passage carefully.

Beyond the crates is a fairly straightforward section with only a few small platforms above the floor. Watch out for any enemies who drop down to the floor from above, and stop in front of the doors to allow enemies to escape before shooting them and moving on.

Eventually you will reach a stack of crates which will force you to jump up to the platform above. Another stack of crates will force you to drop down, but watch out for the particularly dangerous enemies on the ground below, including anyone toting guns or lobbing grenades. You will be forced to alternate levels because of the crates found throughout this section. Be very cautious when switching levels and make sure the coast is clear before proceeding. 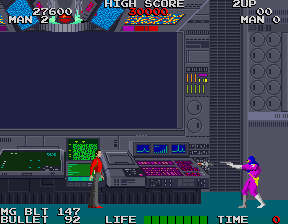 Take out the last of the enemies in front of the computer.

Once you’re through, approach each crate on the floor and stop to allow an enemy to escape through the door before moving on. When you have to jump up to another platform, watch out for Ninjas that will materialize around the area. Try luring them toward you. If they walk up to the crates, they will likely turn around and leave the area.

A short distance away, you will reach the giant console that you have seen the enemies manipulating during the cutscenes. A few enemies will be present to attack you, but with no other levels to occupy, you should be able to mow them all down. However, you will not encounter Mabu at the end of this level. Instead, you will see a screen of him laughing, and you will be sent back to the first stage of the second story, which will be a harder version of the original.

You will be back in familiar territory, as area 10 should remind you of area 5. As soon as you begin, an orange hooded enemy will try to shoot you. After a short walk forward, Blogas will approach you, so squat down and shoot them before they have a chance to jump at you. More enemies will follow, so take them all out before advancing. A Blogas may appear stuck behind the fence, but it will jump up to attack you if you leap up to the top level. 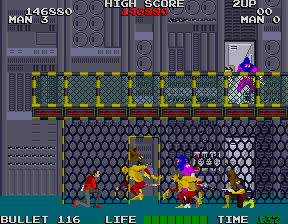 The enemy attack will be relentless.

Use the same level of caution as you travel from the first overhead platform to the second. Move little by little and take out all of the enemies before you continue to advance. Don't miss the machine gun ammo door behind the fence under the second platform. When you reach the small pile of crates, be especially cautious of any gun-firing enemies on the other side. If you are having trouble advancing, try jumping high into the air to confuse the enemies and make them move away from the crates.

Continue making progress across the stretch of floor with few platforms overhead until you reach the next ammunition room. Clear the area of enemies, then head inside and stock up. A set of Blogas are likely to approach you after you exit from the room, so be prepared to shoot them. The section where you must alternate between the high and low platforms because of the stacked crates is identical to the first story, so use what you learned there to pass the next section. 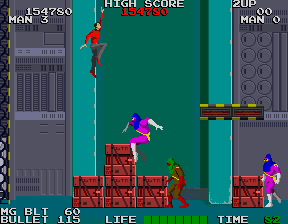 Jump high in the air to confuse stubborn enemies.

Get past the doors with the crates in front to reach the next ammunition door. Then hop and over the high platform and you will be just in front of the super computer. Be prepared to mow down a large series of enemies, including many ninjas who materialize out of thin air on your way to the right. Once you're considerably past the console, a pack of panthers will leap toward you. Stop where you are, squat down and fire at them until they are gone.

Beyond the computer, you will reach a set of steps. As you climb them, try to stop at the very top step, and wait for the enemies below to move back to the right. When the coast is clear, drop straight down the left side. Shoot the Blogas that patrol the ground, as well as the ninjas that materialize. As you approach the next set of steps immediately after, white ninjas will materialize as you begin your ascent. Approach each step slowly and double back when the ninjas appear before proceeding. On the other side of the top step will be Mabu. 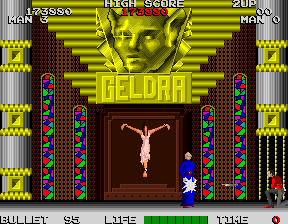 Stay in the right corner to avoid Mabu's attacks.

The fight against Mabu is incredibly stacked against you. Mabu can run faster than any enemy that you have encountered. He attacks simply by rushing toward you and hitting you. Even though it takes two hits for him to defeat you, if he pushes you backward, you are likely to die instantly. To make matters worse, it takes 25 bullets to defeat him. Even if you still have machine gun ammo, this can be tough. However, there happens to be one safe spot on the screen where you can attack Mabu without fear of getting hurt. If you can make it to the far right corner of the screen, Mabu won't be able to touch you. To make it there successfully, you should drop down to the floor where Mabu is standing. Don't shoot him or distract him. Simply run up to him and leap over his head. Continue running to the far right until you can't go any further. Then turn around and peg Mabu with bullets at your leisure until he collapses. Congratulations on beating one of the hardest arcade games ever made.