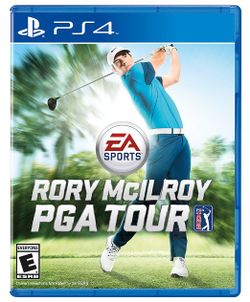 Rory McIlroy PGA Tour is a golf video game by EA Tiburon. First announced at E3 2014, it was released on July 14, 2015 for PlayStation 4 and Xbox One, coinciding with the 2015 Open Championship.

The game was re-built from scratch as part of its shift to eighth generation consoles, adopting the Frostbite 3 engine to provide the ability to render more realistic environments and render courses as a single map rather than individually. Additionally, the game introduces new swing modes and assists, and an arcade-style challenge mode. It is the first entry in EA Sports' PGA Tour series since 1998 not to feature Tiger Woods as its namesake, replacing him with current world number one Rory McIlroy.