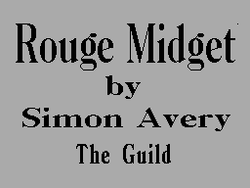 Rouge Midget is a text adventure game that was released by The Guild on the Sinclair ZX Spectrum in 1991; it is a spoof of the BBC television series Red Dwarf, which aired on BBC2 from 1987 to 1999 and starred the Spitting Image impressionist Chris Barrie (as Rimmer the hologram). The player must take on the role of a lowly Scutter (apart from one letter in its name, the rest of the characters' names remain unchanged) who has been told by Holly (the Rouge Midget's computer) that the ship is due to collide with an asteroid belt in two days and kill everyone aboard - and the Scutter must find a way to escape from the ship and go to "Scutter Heaven" (a local planet upon which humans serve Scutters).